After dropping my daughter at ADMU for her guidance counseling session I headed down to my teammate Reggie at BF Homes to get my team's tri kit, cycling kit, singlet, and tech shirt just in time for the Turbo Sprint Triathlon. 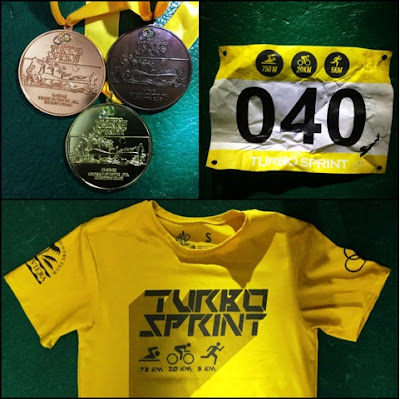 As the sun started to set I said good bye and departed from the metro and on towards Silang, Cavite. I checked in at a hotel near the race venue for a stress free travel on race day.

It's been quite a while since I joined a small race, something unusual since I love small races with its simple procedures. What's not to like in it where race packet pick up, bike check in, transition set up were easy and most importantly there's always an available seat at the toilet :). 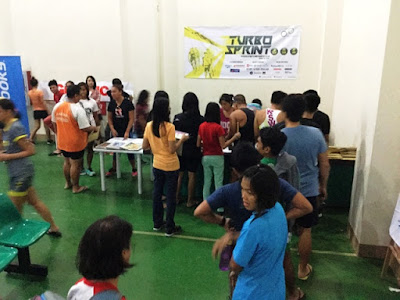 I wasn't too early but I was the first in line (no line yet) to get my race number. Riviera Country Club was a nice venue except for the road humps, four actually. Everything was happening in one place. Registration, body marking, transition, race briefing and later on finishing and awarding were all done inside a multi purpose building. You can see it from the photo below.

Everything under one roof

Talk about spectator friendly race course: 6 loops in a 25 meter pool, 4 loops of a technical course and a 1 loop run on the same bike route. The ladies went first and you wouldn't suspect that most of them were newbies what with those game faces on. I guess that's what racing give every aspiring athlete; a somewhat tenacious look and you know they're not there to just finish it but finish ahead of someone else.

As the first female was out of the water we were called to position ourselves for the start of our wave. This was the only time I couldn't remember how they got us started, there were no horns or guns that I've heard and guys behind me were still saying 'is it a go?, do we have to start swimming?', it was a time to laugh hard but you gotta swim when you gotta swim.

The swim course was the one thing I missed the most with this kind of race. The maneuvering and the jumping in and out of the pool reminded me of Ayala Alabang Days. 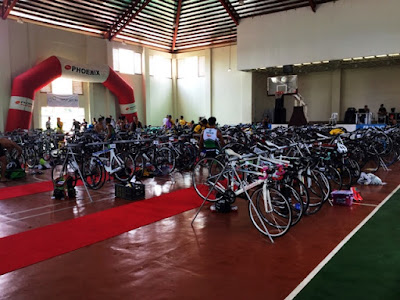 The bike course was a 5 kilometer loop made technical by the U turns, curves, inclines and humps. You'll definitely stop to check on your tires when you hit those humps... promise! And because I am the slowest biker in all of triathlon I got to enjoy the route a little bit more I guess. 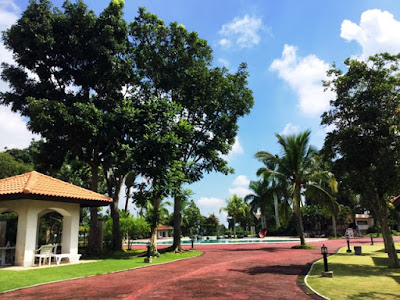 Since the run route was the same as the bike course with only one loop in it I already knew what to expect. At that point I was wondering how I missed badly on my goal time. Even the worst biker in me couldn't be that slow but of course we all know I was that slow ;(. Well we still have a run to tend to, do we?, and I started running quite good I might say up until a kilometer out where I couldn't hold my form and resorted to using smaller steps and hip movement (it's been happening quite a lot lately and this was the third race I abandoned my usual running form with those long strides). 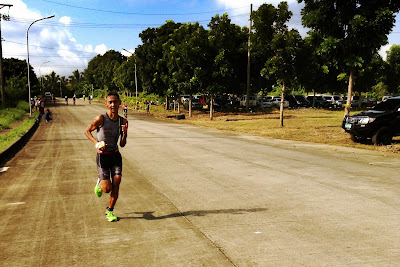 Turbo Sprint was short and it was over in what seemed like a blink of an eye. Because of my earlier wave start than most triathletes I was the first one to cross the finish line.  Gotta love small races!
No comments:
Email ThisBlogThis!Share to TwitterShare to FacebookShare to Pinterest
Labels: triathlon

Here are some photos from my gym workout last weekend. The gym has a lapping pool but I didn't get to swim. 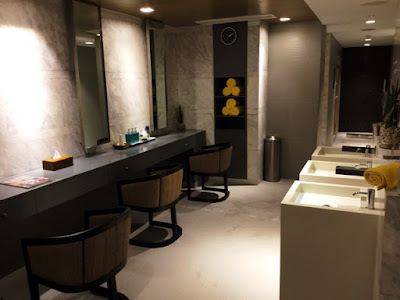 The toilet and bath 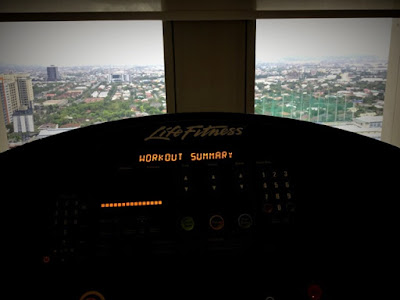 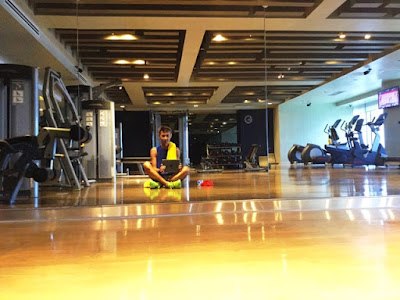 The selfie ;P
No comments:
Email ThisBlogThis!Share to TwitterShare to FacebookShare to Pinterest
Labels: training

In triathlon they say you have to work on the sport you're least proficient at and remain strong on the ones you're fast at. If you're good at the three disciplines, good for you, you're one of the few who can swim, bike and run strong. For the rest of us there's always this one or two things we really need to improve upon. 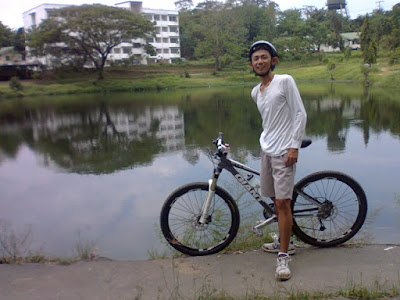 On my first ever bike ride - the mtb wasn't mine and look at them badminton shoes :)

I've been doing this swim bike run thing for quite some time now to know my own strengths and weaknesses in endurance sports. It's easy for me to say that in triathlon I am an average swimmer, an average runner and a slow biker. I did work on my cycling but unfortunately I didn't improve much. Caring for my past knee injury prevented me from going hard on my cycling workouts. For an in depth look of my own weaknesses here are some things I've considered. 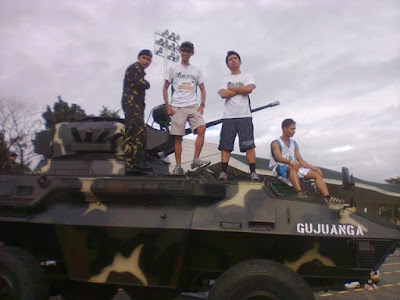 Training - Strength: structured
Weakness: workouts are short and I tend to have long lay offs every now and then sometimes it could last for a couple of months.

Acclimation - Strength: I'm accustomed to heat and there were times temperature on the race course gave me reason to quit but I didn't and learned to love it at times.
Weakness: Rain and cold weather is always a problem for me.

Mental Toughness - I admire people who could endure the sport in different places, terrains, time and conditions; something which I can't simply do. I can't sign up for a mountain run not because I'm uncomfortable with trails, I'm more than uncomfortable - afraid is more accurate. Night gives me the creeps as proven in my last Audax ride which led me to pass up on Audax 600.

Execution - Strength: I've been to some races and finished them all, I can also go pretty hard on short distances... who doesn't?
Weakness: Inconsistency and my own porta potty issue - always.

Swim - I'm an average swimmer, on a 1.9K course I could finish in 34 to 39 minutes depending on course conditions.

Bike - By now most of you probably know how slow I could go on the bike so definitely this is my Achilles Heel. My last 90K ride on a very easy course was 3:01.

Run - Depending on the distance I could go from average to horrendous. On standard distance triathlon I'm your average runner always hoping for a 43 to 50 split but anything longer than that and I'm seriously a crawler at times, I had a 2:32 run split where I just couldn't fathom how I finished that one but my last run off the bike was 2:01 though.

Note: Since I started triathlon I swore I would only devote much time in running if ever I become a strong biker. But for some reason I never even reached a point where I could consider myself average in cycling. In hindsight I could have concentrated in running and probably become a better runner by now BLEH!