This was the race I had been preparing for since January 2018. This was the reason why I was doing long runs, long swims and a couple of long rides. This race made me run long like I really needed to run, made me enjoy long hours on the saddle like a young cyclist and made me swim longish until my hands got wrinkly. As far as I can remember there were only two races where I trained with long runs and those were marathons. I like biking but was never really one to put crazy miles in a week’s ride. I can swim but I just did it for the sake of joining events. So my training for an Ironman, born out of necessity, was a bit off my comfort zone but I had the time to prepare and prepare I did. 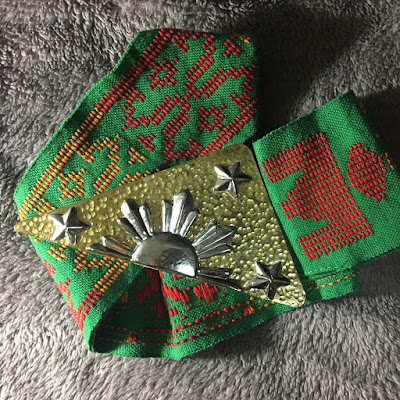 For such a momentous race for myself it was almost unbelievable and hilarious that I almost got late to the venue. The moment I arrived at ACEA there was I think just 10 minutes before the organizers would close the transition area. Everything was a blur, running back and forth inside the transition area preparing gears and street bag. 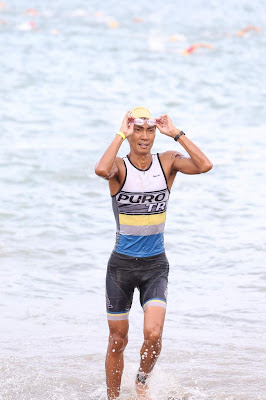 The swim was a rolling start. I started in Zone 3 group with the orange colored swim cap. It was uneventful, thankfully it was over in 1:17. Everything was turning out as planned so far. After the swim I changed clothes inside a tent before going inside transition 1. 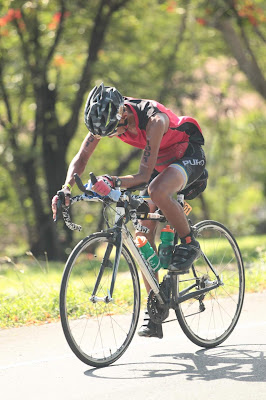 After just a few kilometers on the bike, I felt I had to poop so the first portalet at around 15 kilometers was a jackpot. I spent some time there and what I remembered was it was too hot inside and looking at my watch I thought I still had a lot of time to get inside transition 2 at around 3:10 P.M. as planned. I had a multipurpose tape around my drop bar with the expected time splits for the turnaround and some aid stations. I was happily hitting the target times at almost every time check. At around 70 kilometers I saw in front of me the rain we were about to hit so I grabbed my rain jacket from my belt bag and wore it. I looked like a clown but cold is the enemy and I was prepared for it. With a flappy jacket my speed dropped by almost 5 kilometers per hour, it was a bummer but I was still hitting my time checks with ease. I did eat twice on different pit stops, sausage and Hopia never tasted that good. When you’re hungry it doubles the pleasure of eating I guess. Because I wasn’t feeling particularly warm enough after the rain I was still wearing the jacket long after the rain stopped. With almost 160 kilometers done I changed clothes again, this time it was a very loose red sleeveless running shirt. The last 20 kilometers saw me making the sign of the cross praying not to have mechanical problems. At 2:59 P.M. I arrived at transition 2 eleven minutes earlier than planned. 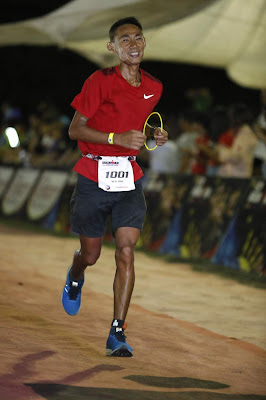 Inside transition 2 I took the time to pour water unto myself as if taking a shower. As refreshing as it may sound it was still 3 P.M., with the sun up on a clear sky. I changed attire once again, this time I wore walking shorts and an orange sleeveless shirt, I didn’t look like someone doing an Ironman but believe me this was how I dressed during training so this was nothing new to me. I love pockets on my pants and walking shorts were comfortable to me so I ran and rode with my casual walking shorts when I went out to train. 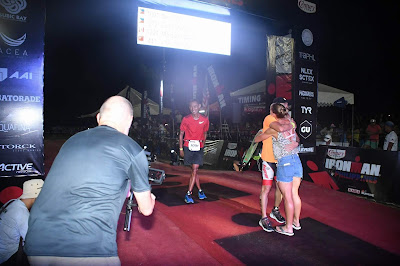 The run leg started with my usual routine, a trip to the nearest portalet for a second poop of the day. Looking at a very dirty portalet I would find myself venturing to a gas station. It was a success but it really took too long. I was surprised that my legs were holding up just fine throughout the run. I changed clothes again on Special Needs station wearing a red New Balance T shirt and again for the Nth time on my last trip to the Special Needs station wearing a red Nike T shirt. I still have a fresh shirt inside my rear pocket just in case I would change shirt again. The provided nutrition on aid stations EVERY ONE KILOMETER saved my day... and night. I drank cola, Gatorade and ate bananas. The last four kilometers were the longest 4 kilometers of my running life. At 40K everyone would pass by the finishing venue with still 2K to go. I had 2K left to run, some 12 minutes to cherish what I am about to accomplish and a lot of time to change clothes again for my finishing photo but all sorts of things kept coming inside my head that I forgot to wear my fitted muscle shirt. It was 8:21 PM when I crossed the finish line, 13 hours and 46 minutes to glory. If you’ve read this far, thank you so much for dropping by. 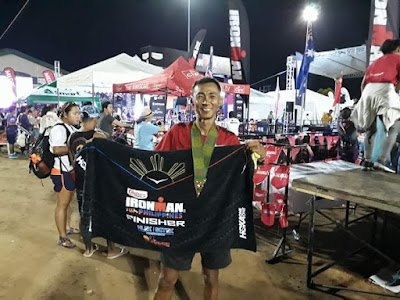 Ironman Philippines was a huge success for the organizers. They brought in the full distance triathlon with so much care for the participants. The aid stations for the run leg alone were eleven on a 2 loop course which gave us approximately one station for every kilometer. And to top that off, every aid station was manned by triathlon teams who volunteered to help and cheer us. Amazing. 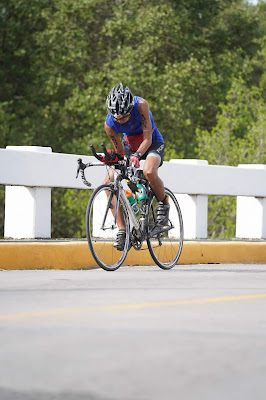 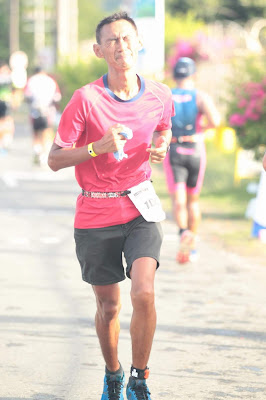 I think this was my 6th shirt of the day 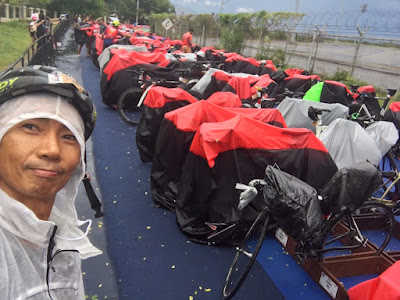 At transition 1 with my rain jacket 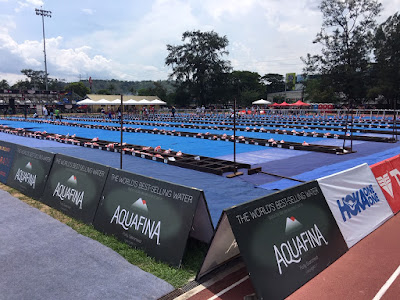 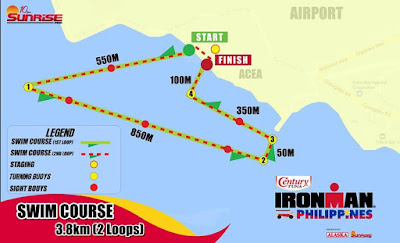 2 loop swim course because they added a 70.3 event coinciding with IMPH The bike course mostly inside the tollway 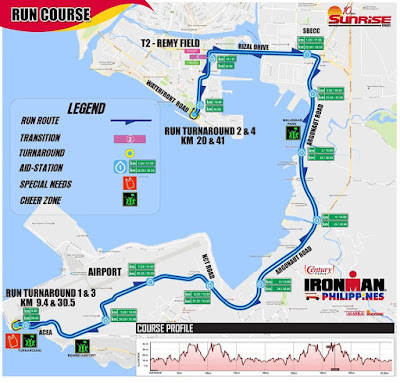 A very safe run course even at night... look at all those aid stations
No comments:
Email ThisBlogThis!Share to TwitterShare to FacebookShare to Pinterest
Labels: triathlon

Once upon a time in Hawaii, three triathletes had a jog as a sort of lighthearted protest to decrease the number of triathletes who unknowingly offend the sensibilities of the islanders by wearing Speedos - skimpy old style Speedo trunks yey hahaha.
For the inaugural 2018 Ironman Philippines we had 3K Underpants Run presented by Century Tuna.
Aside from running in only my red underpants, I got to meet my long lost cousin based in the USA. A few participants wore costumes, some wore underpants and many wore shorts.
We gathered just outside the convention center for a few minutes before they signaled us to run. There was a prize for the first finisher and everybody owned a nice black finisher shirt after the short and fast jog. It was no surprise that every runner looked very fit and fast unlike any other fun runs I joined.
I was glad I did this, it was both fun and liberating. The experience and the freebies were good enough reasons to try this race a day before the Big Race. 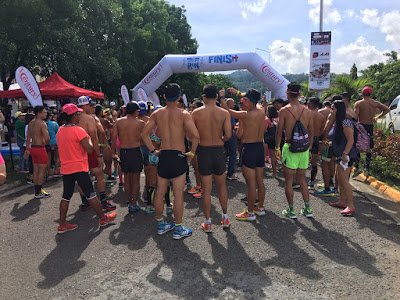 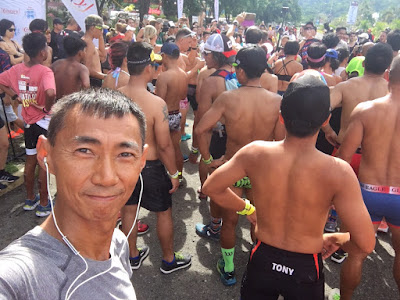 For lack of photos pardon my selfie

My long lost cousin from US - he's legit fast
As much as I would like to share my leg's tan lines... I'm shy
No comments:
Email ThisBlogThis!Share to TwitterShare to FacebookShare to Pinterest
Labels: running

This race was part of my road to Ironman Philippines 2018. I got to swim in open water and had a look at my progress in cycling and running. By this time the color of my skin was pretty dark, a sign of training perhaps? I couldn't remember a time when I was more prepared than this race, I just didn't know if I can execute properly on race day.
I had a horrible swim but I didn't know how I had a poor swim, I thought with my effort in the sea I'd be somewhere in front. Maybe because of poor sighting.
The bike leg was awesome. I was flying by my own standard. Not super fast but definitely well above my past experiences on a course like that. Stickman was all smiles with the way the cycling went.
The run course was flat and I think it really helped with the time result.
Total time was 2:39. My legs felt fine even after I pushed it on the bike. Suddenly after years of joining races, it seemed I was learning how to bike ;) .
There was one thing I observed during the event; participants seemed fewer than the last few times I joined this. Maybe I was wrong but it just felt that way to me. 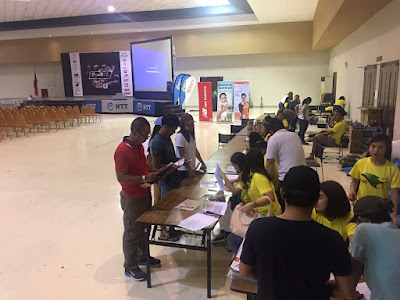 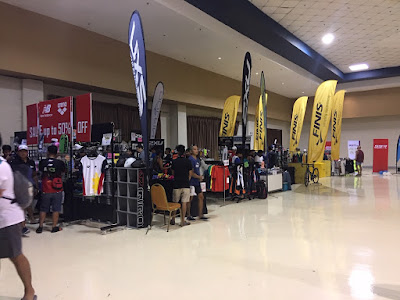 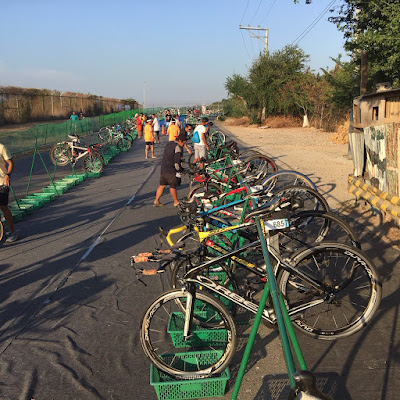 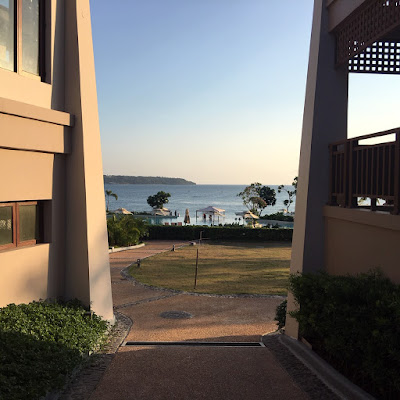 View of swim starting line from the hotel walkway 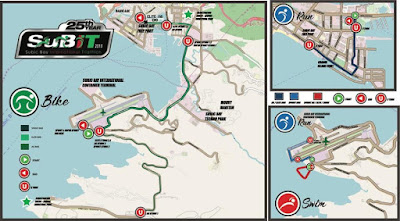 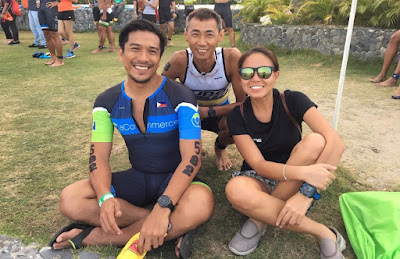 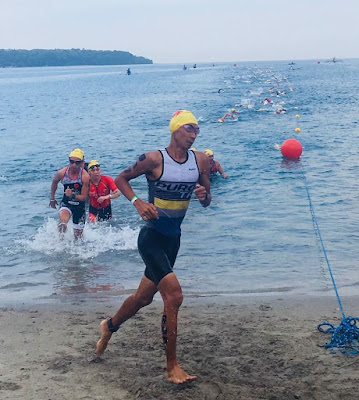 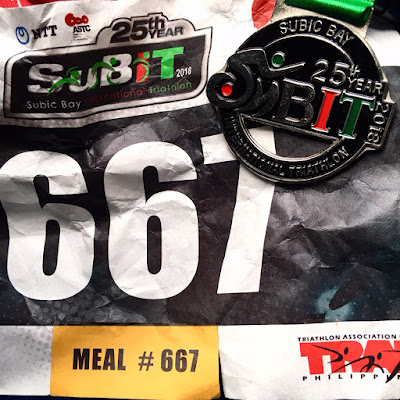