Look Who's On The Cover!

No it's not me, Swim PH's April Cover girl is my pool lane mate Tintin. Don't know how old she is right now but I saw her swam 800 meters in 10 plus minutes when she was 12. Sound fast? Wait til you see her swim her favorite stroke, the butterfly. 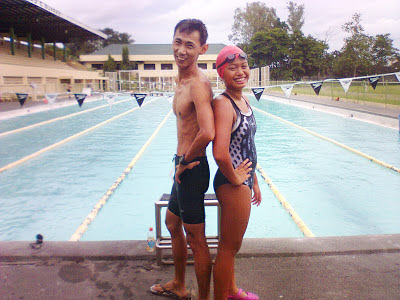 My mate on lane 4 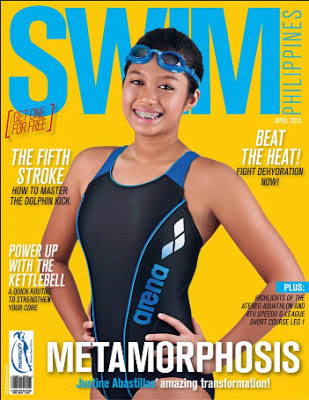 On the cover of April 2013 issue
No comments:
Email ThisBlogThis!Share to TwitterShare to FacebookShare to Pinterest
Labels: Swimming 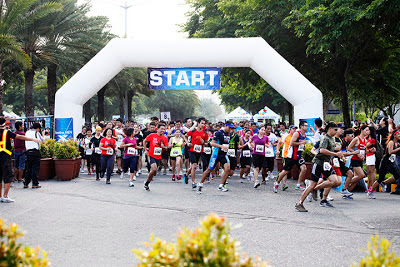 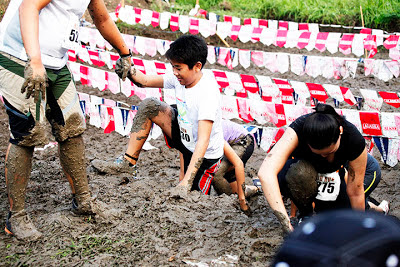 A helping hand: nice and dirty 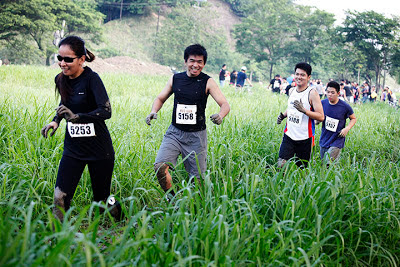 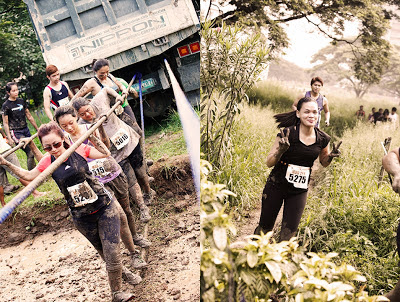 Bottleneck at the rope 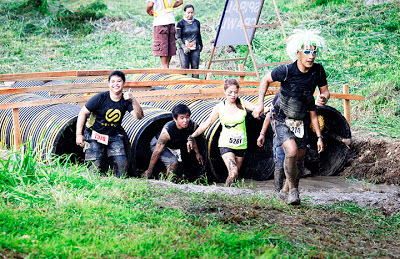 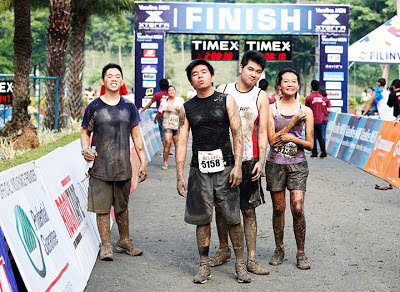 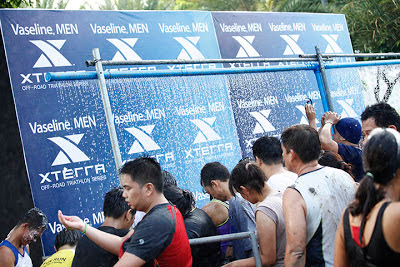 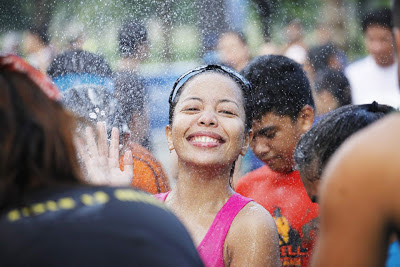 DJ Karen tidying up
No comments:
Email ThisBlogThis!Share to TwitterShare to FacebookShare to Pinterest
Labels: running

Using our mountain bikes, we climbed up to Quezon National Forest Park aka zig zag aka eMe. There were four of us riding our mtb's, a pair of 26ers and a pair of 29ers in celebration of my friend Zaldy's birthday. It was a 60 kilometer chillax ride to the top of the mountain where we had breakfast. 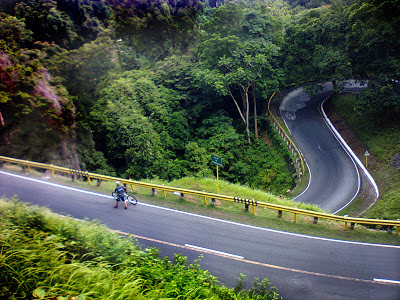 Zaldy taking a walk: he's such a newbie :) 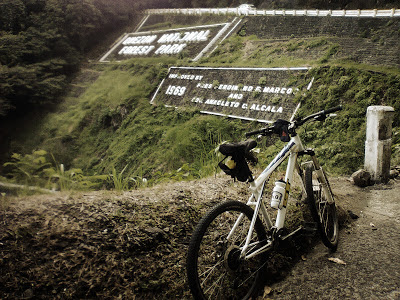 My bike on a cliff 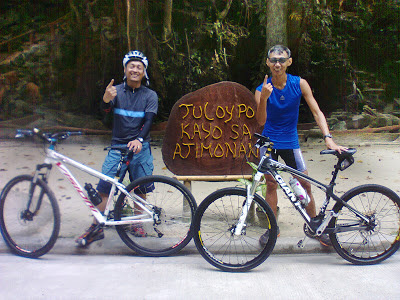 One last pose before we descend... burrp
No comments:
Email ThisBlogThis!Share to TwitterShare to FacebookShare to Pinterest
Labels: Cycling

Off Road Duathlon at Hacienda Escudero

For starter, this didn't turn out well. My first attempt at off road racing was a bit of a failure right from the start. Two days before the event I went to the venue for track reading. A fellow named Hermie generously guided me through the track. It was a mix of lots of trail under the coconut trees and some paved roads of an empty subdivision. The trail was flat with turns all over the place and the grass slows the wheel down substantially. I wasn't doing well that day but I already expected that since I'm riding with tires suited for hard pack concrete like roads. I knew I had to use a different set of rubbers and there lies the problem, I didn't change them so I was doomed right from the get go. 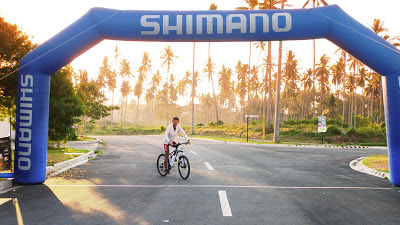 Early enough to bike through the run route before gun start

The first run started out well, I reached kilometer 1 in less than 4 minutes and second to go inside the transition area. The run course was approximately 3.5 kilometers and only 35 percent of it was off road and is flat as any pancake's bottom.

Then came the bike leg and with 60 psi of inflation I was bouncing hard on the track. Coupled with my lack of skills on trail riding, or biking in general, needless to say the 22 kilometer ride went slow. And as if that's not enough I encountered two more problems first with my rear derailleur so I had to stop and fix it and second by getting lost in the lagoon portion of the track. By this time I was just enjoying my ride and hoping to finish with a smile on my face as the brutality of off road biking put a toll on my butt and triceps. Maybe a 60 kilometer road bike course is easier than this. My speed was definitely 3 times less than my road bike average. 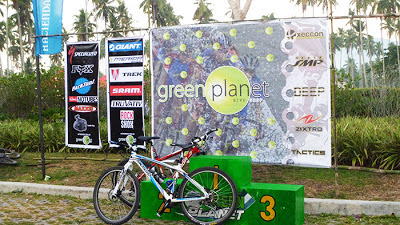 Obviously I won't be stepping on this in the near future

As I entered the transition area to prepare for the second run there were more than 15 bikes already hanging on the bamboo poles. I was able to overtake 5 or 6 runners on my way to the finish line and placed 11th overall out of less than 40 participants.

Would I do this again? Maybe yes if the participants remain few. I don't think I would enjoy it this much if there were more than a hundred of us battling it out on the trails. Trail riding could easily be dangerous if there are a lot of overtaking but the allure of mountain biking will always be there. Off road racing is too technical you just can't spend time on a trainer and hope everything will be fine. 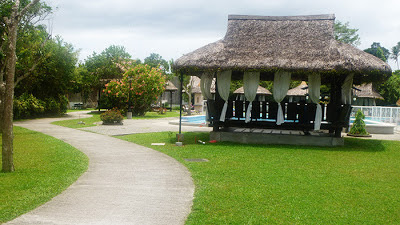 After the race we went to a resort and spa nearby and enjoyed the rest of the day with good food and massage. Ah... Life is good!
No comments:
Email ThisBlogThis!Share to TwitterShare to FacebookShare to Pinterest
Labels: Duathlon

How did I come to this? Zero race for the month of April. With much of my Sundays devoted to work, I didn't have the time to even join a fun run. This is the first month that I haven't joined a race since the start of 2012. Last year my addiction to the sport led me to join more than 24 events. But this year I don't think that's gonna happen. So does joining races make me faster? Well my answer to that is yes and no. Yes because it definitely motivated me and since my workouts were mostly low mileage and low intensity exercises I treat races as my hard workout days. And no because sometimes they just get me all banged up and put a big hole in my training schedule.
No comments:
Email ThisBlogThis!Share to TwitterShare to FacebookShare to Pinterest
Labels: triathlon
Newer Posts Older Posts Home
Subscribe to: Posts (Atom)