400 kilometers is a long, long ride. But to put it in perspective, two things: 1. This is not a race, 2. I have a personal SAG. If it weren't for these I wouldn't have done this ride and miss the joys of long distance cycling. 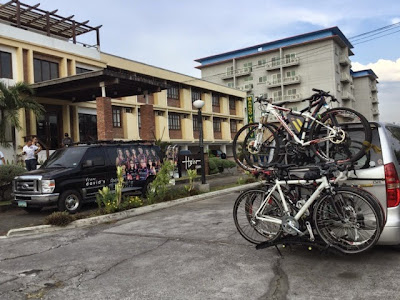 Coming into the event, I prepared for three weeks. First I called my friend Byron of bisikletaadventures.com to discuss our entry, I thought it was a done deal but still he needed some convincing because as I learned he wasn't riding much at that point and already posted in FB about his non participation due to lack of training. But it was an easy sell as he is an addict of cycling and a tiny amount of reason would easily convince him ;) Second, since I wasn't running since March 8, I have a well rested body and could concentrate on riding and not worry how sore it could get when it's time to run. 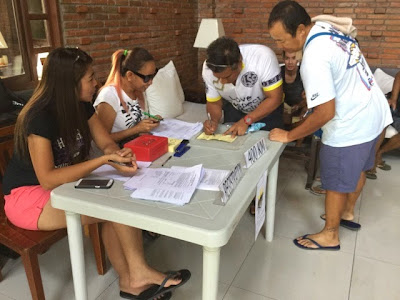 We registered at Mango Valley Hotel lobby at exactly 5:00 P.M. the day before the big day. Shy told us there were only 20 medals available so we availed of it outright. It appeared that there were 75 participants/hardcore/addicts who will go on to enjoy the ride and only 20 finishers could get the finisher's medal which was brought in from France. 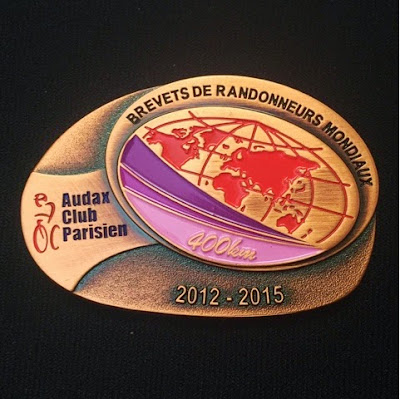 From Paris With Love

The ride started at exactly 3:00 A.M. It was dark but it wasn't cold. I was wearing my usual running shirt, the reason: I don't have a cycling jersey... EVER. We all had our fancy lights and blinkers, all 75 strong of us I guess. 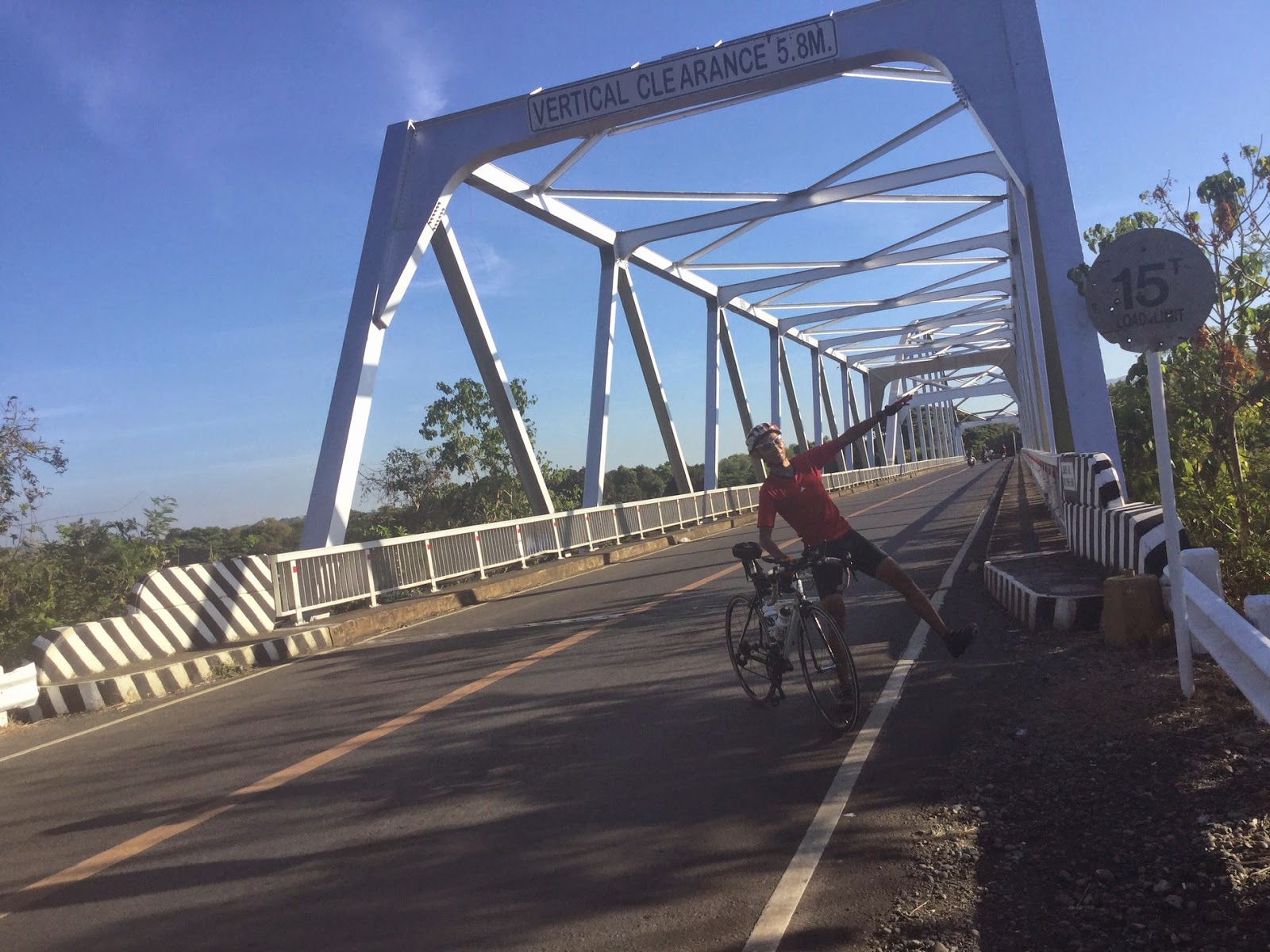 The Bridges Of Zambales

The first 50 kilometers were pretty much easy. I arrived at the 51.7 kilometer checkpoint at 4:57 A.M., got my card stamped and took off. On my way to the second checkpoint I heard Carmela's voice yelling my name to join their peloton, I am not good with pelotons but it was a chance to save energy and make the most mileage before the sun would torch us up. I joined and stayed at the back up to 150K mark. As I was at the back of the paceline I couldn't help but ask the guys near me if it's ok that we weren't taking our turn to pull. The ride was actually too easy at the back that I felt guilty and I couldn't enjoy the view as I was locked in on the tires in front of me. 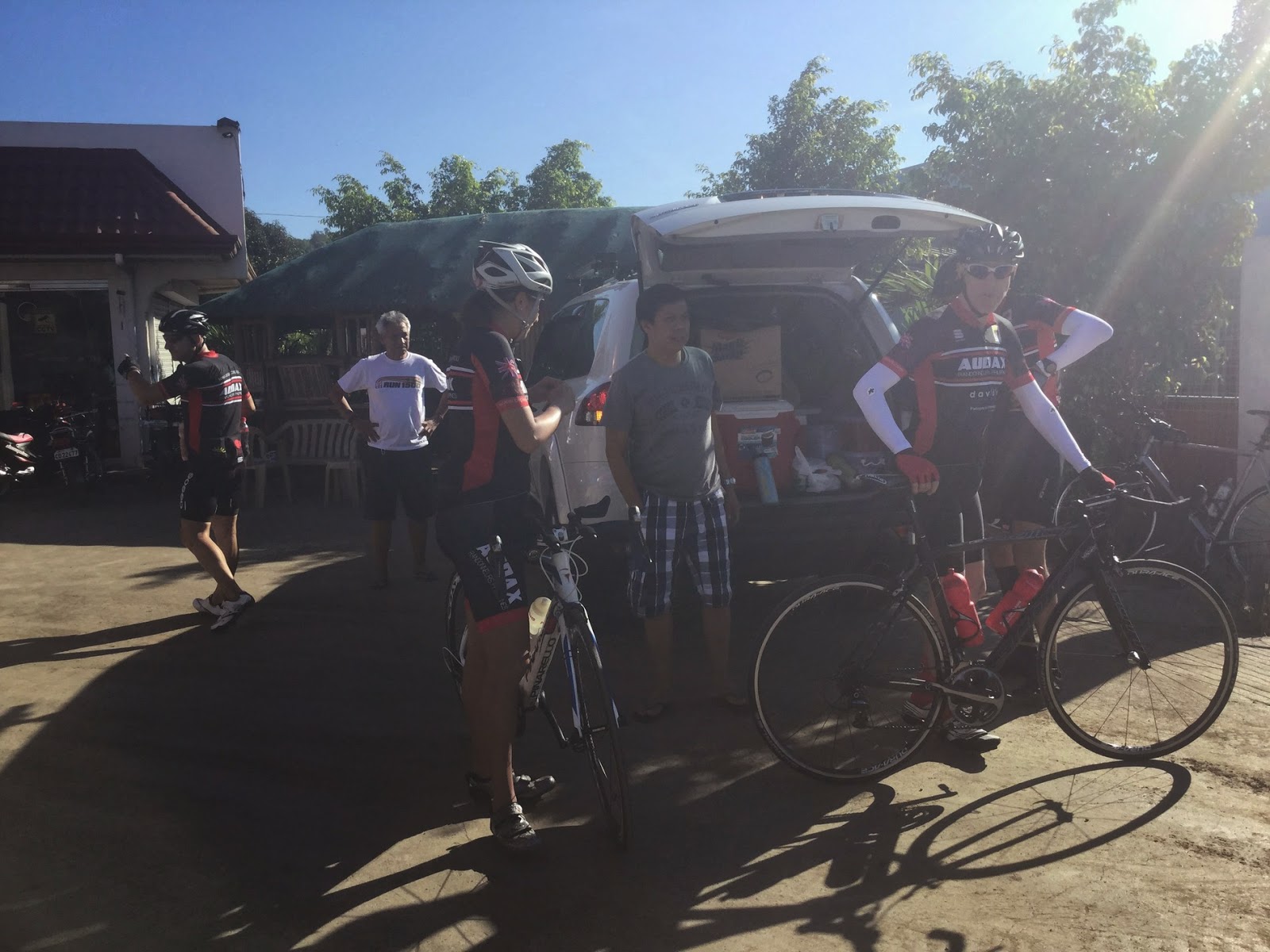 We arrived at the 150K point at 8:46 A.M., and guess what, my legs were still miraculously fresh. Since I am the weakest biker in the triathlon world :) this is clearly a miracle work of Carmela's Awesome Double Paceline locomotive. 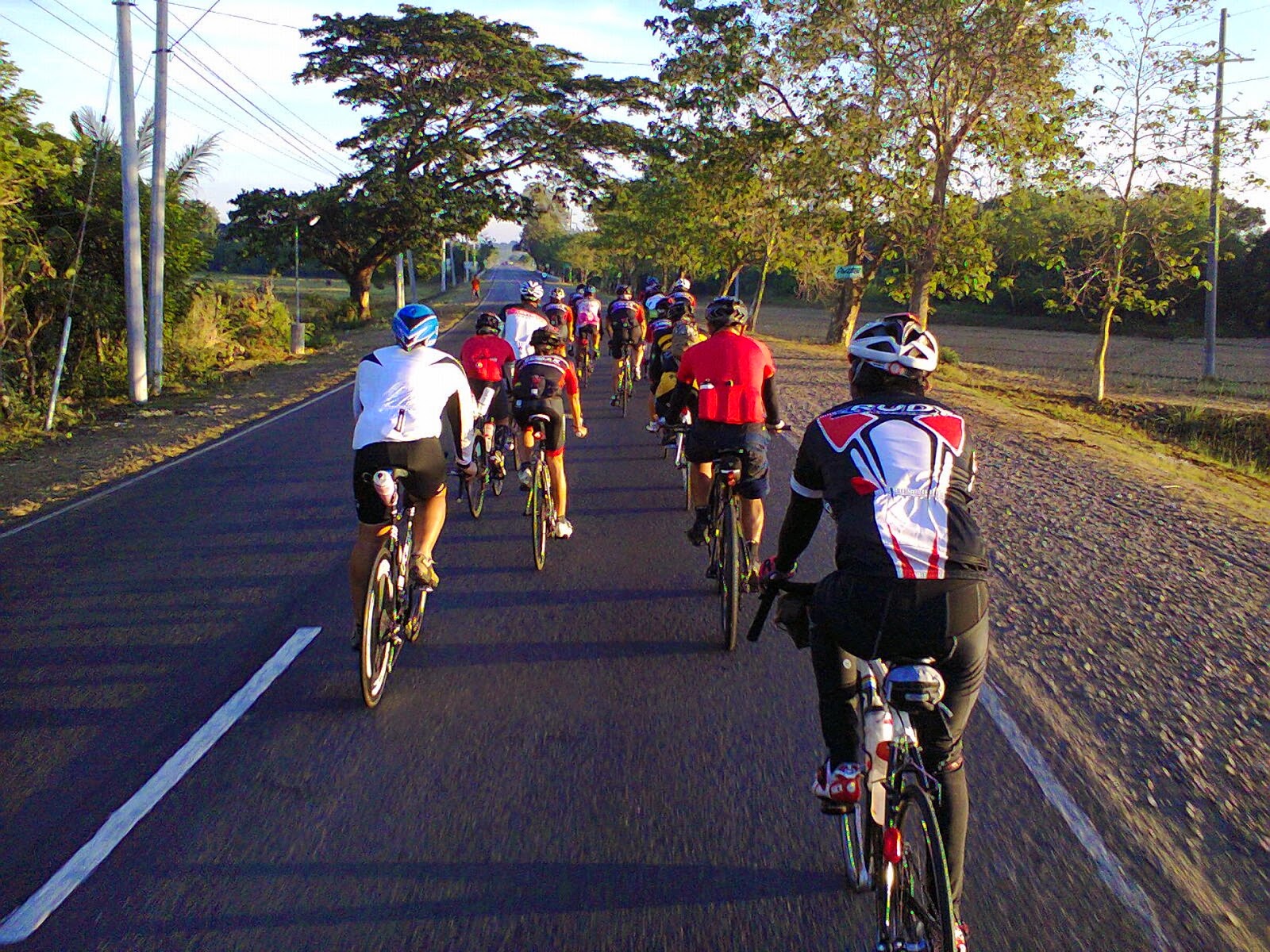 The checkpoint was at Banana Beach Resort in Dasol, Pangasinan where I took a shower before heading to Alaminos City for the turnaround point. The sun was already at its peak and the road was unusually harder than the flats of Zambales. When the peloton passed me I was on the side of the road taking a break and by the time I could mount the bike they were gone. I went inside the city of Alaminos which was a mistake after ignoring the by pass road going to Sual. 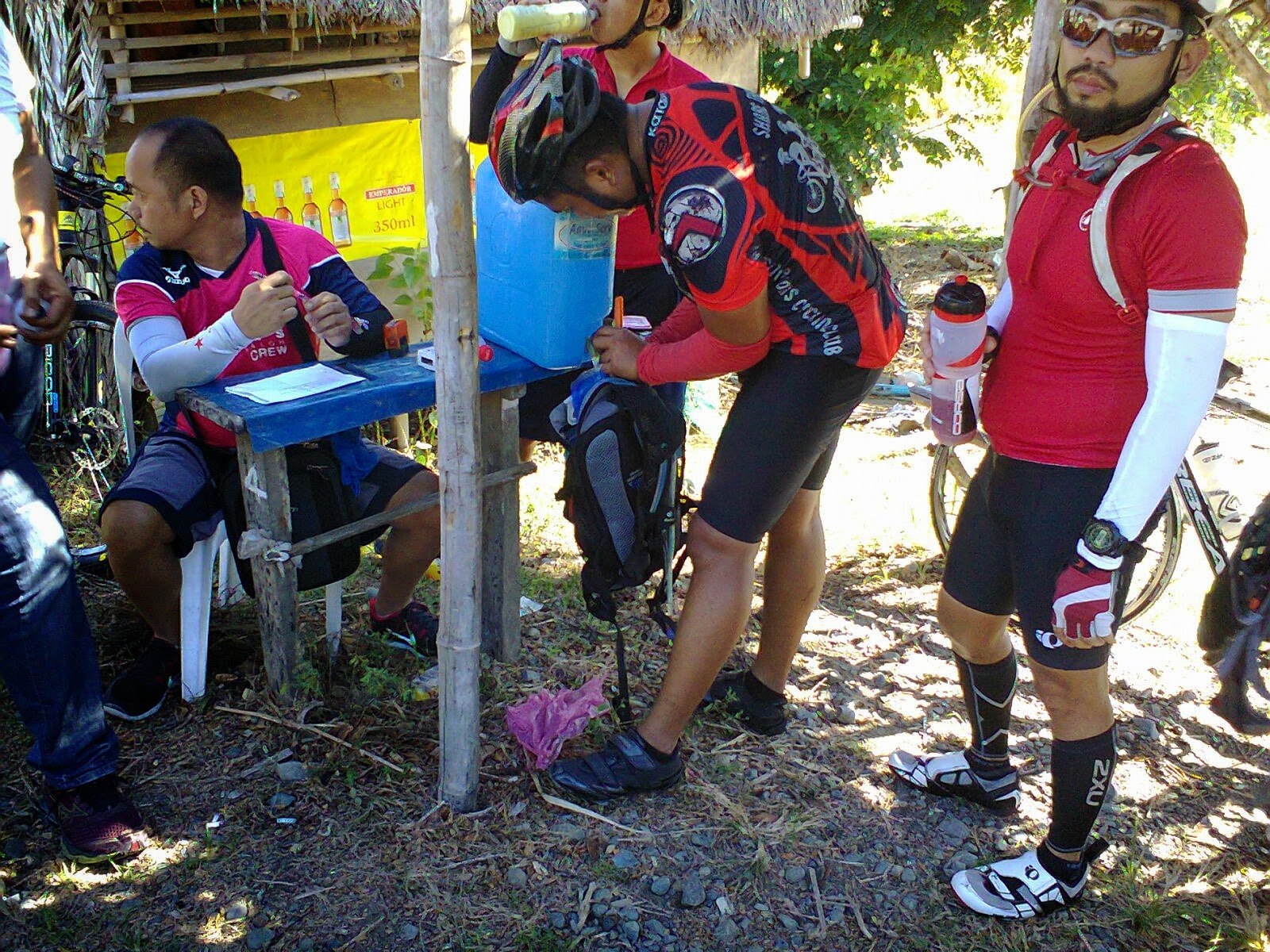 At the turnaround point I was kind of hoping to have a good long rest and use the toilet, turned out there were none. I had the card stamped and rested for approximately 45 minutes hoping the clouds to come and cover the sun. The clouds never came, I decided to start rolling back to Subic. 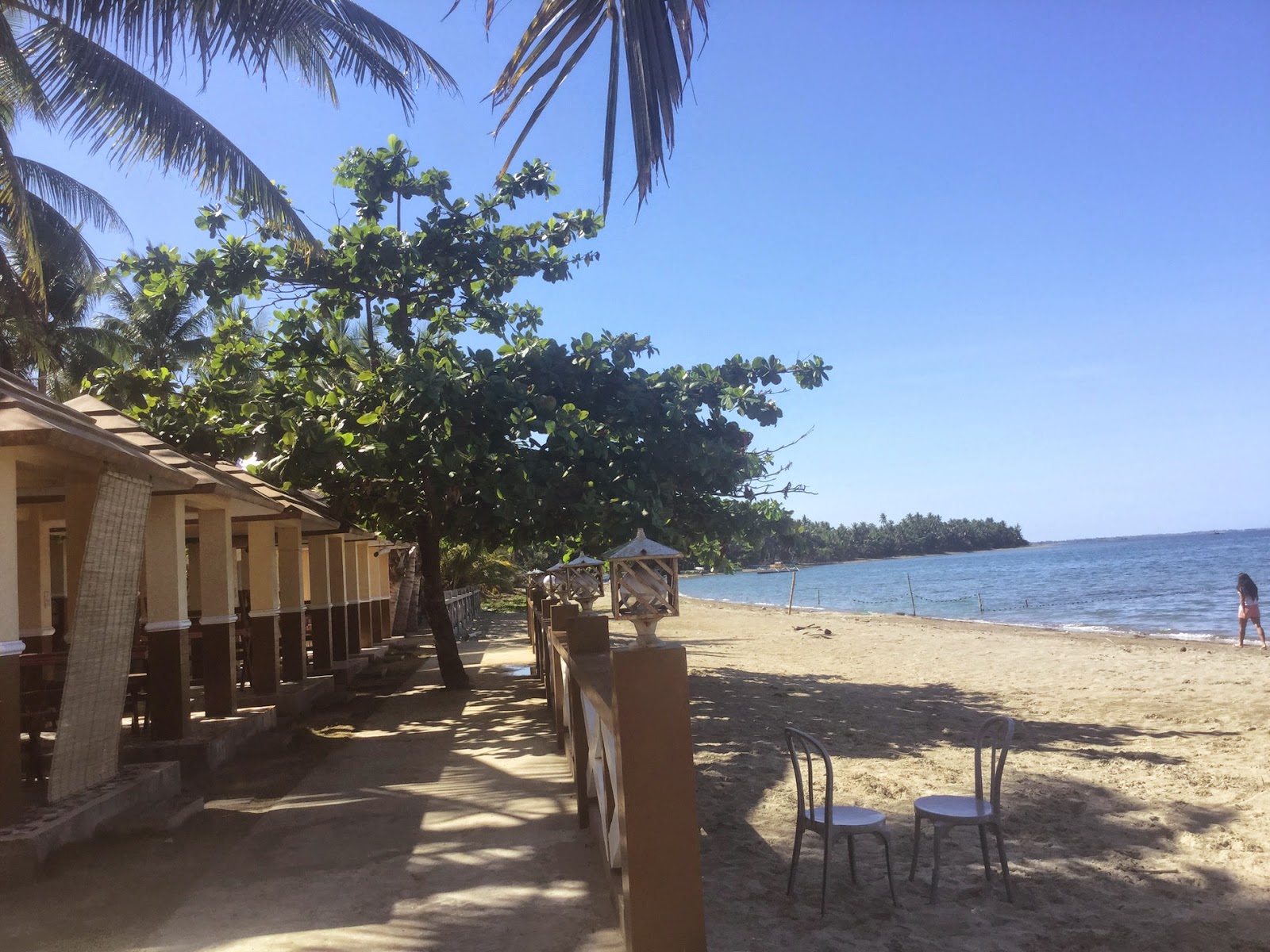 It took me a lot of time to go back to Banana Beach Resort, the next checkpoint. There I hit the shower again and changed clothes before I ride once again. The ride back to Subic was full of stops, I mean I rested a lot on the side of the road, on sari sari stores, on top of a hill, everywhere. When the sun was about to set I prayed to reach the top of the Masinloc climb before the sun go down. 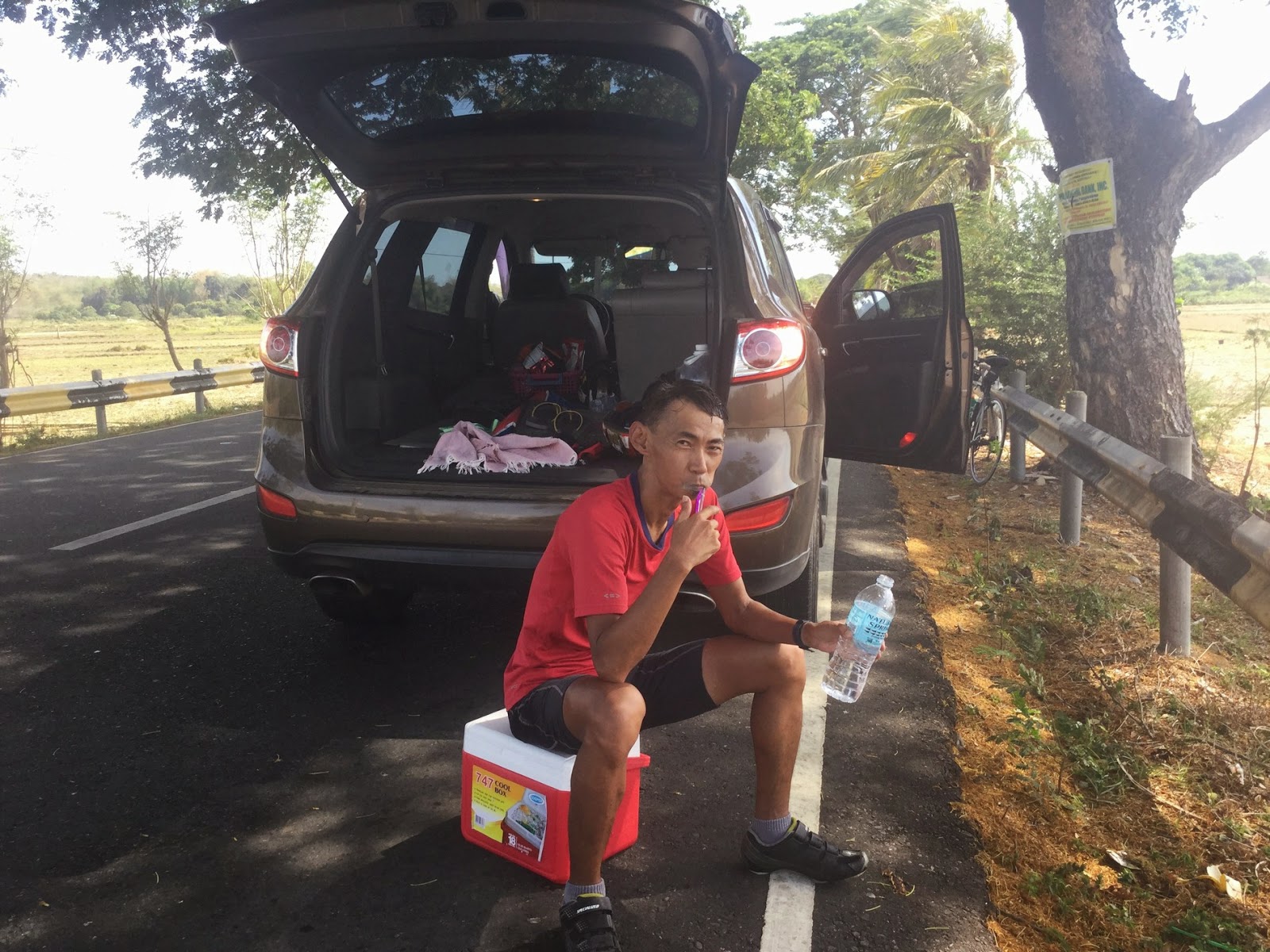 Then darkness fell... the one thing I dread the most. My legs and body were holding up well but the blackness of the night was the one thing I couldn't stand. I called the Masinloc climb the Silent Hill as in the horror video game I used to play. 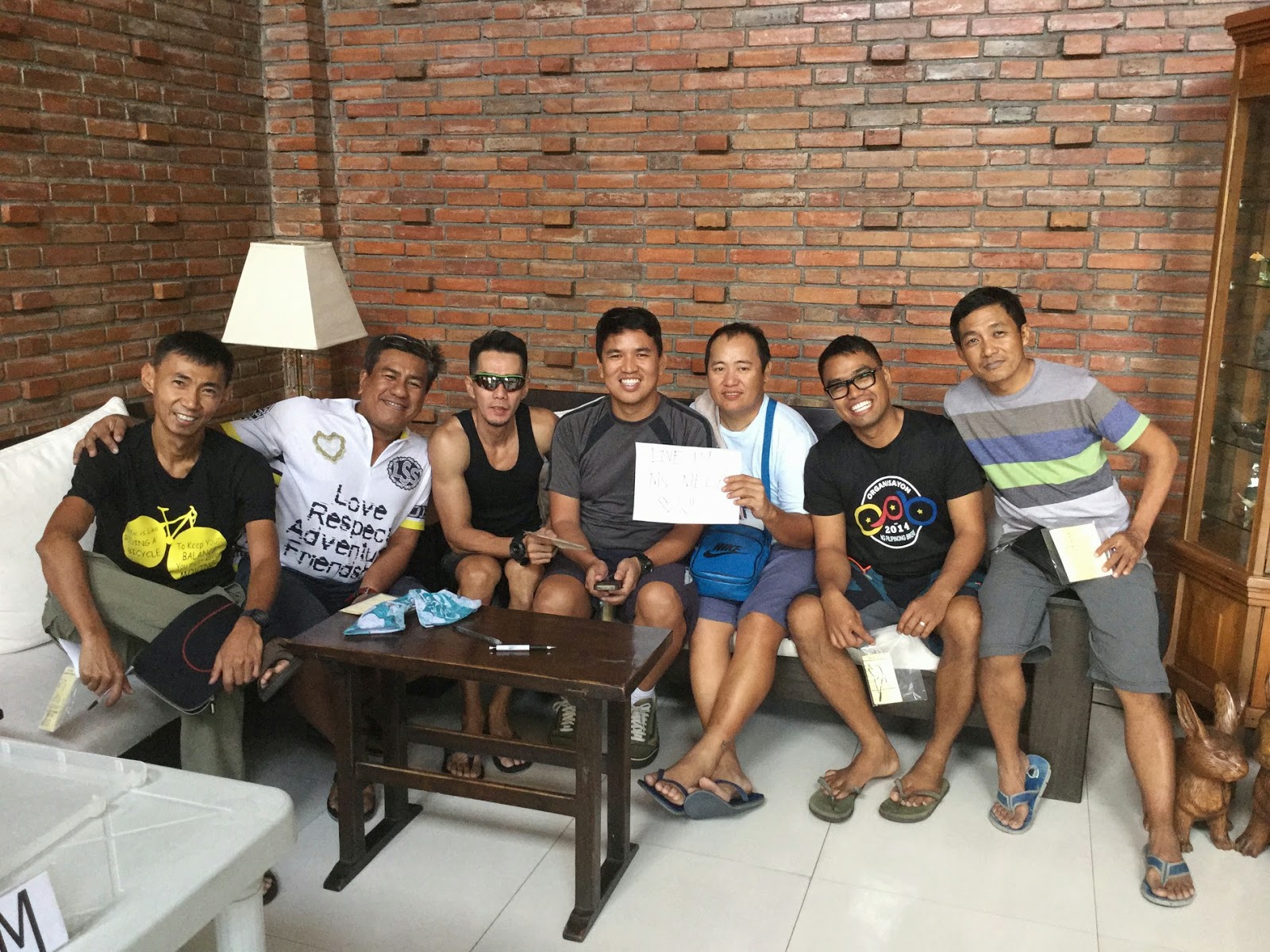 Before the ride I left my daughter alone in Subic, turned out she enjoyed her day being alone and actually had parasailing into the sunset but she got stuck at Yellowcab Pizza House and couldn't go back to the hotel by herself so I had to hurry up and be there before midnight. I pushed hard with only 20 kilometers left and finished at exactly 11:41 P.M. I was 24th at the 350K checkpoint and finished 20th, I overtook 4 guys along the last 50K but only saw 2 of them. 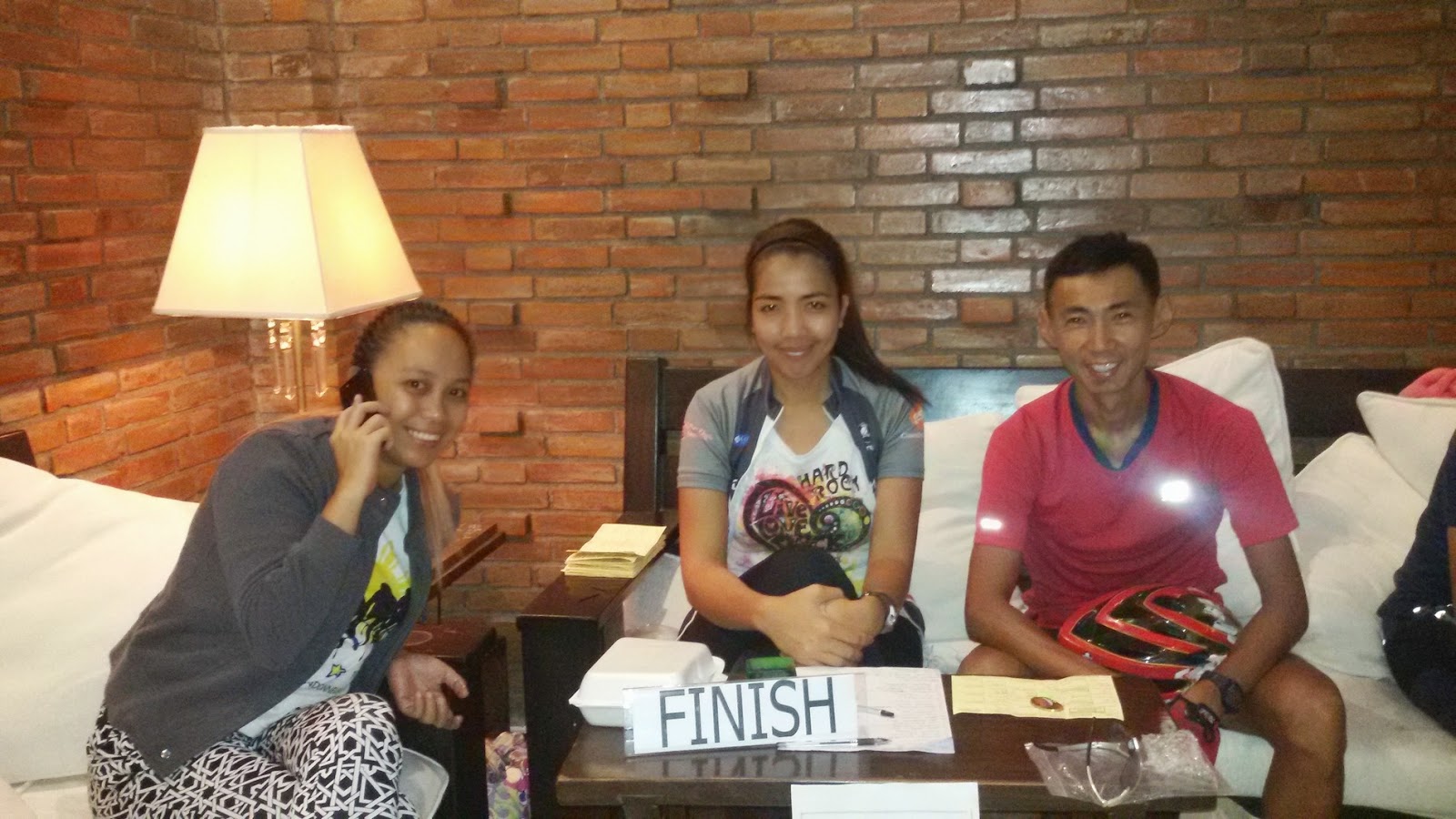 The cyclocomputer had logged 409 kilometers, I got my Audax medal, I was in one piece and my daughter enjoyed her day, so you'd guess I'm booked for Audax 600? Well, you're wrong, although the physical endurance came as a surprisingly positive experience it also revealed that I won't stand the night time ride. My mind was playing tricks on me, even the flat roads looked realistically uphill for the longest time. The darkness of the night made me doubt myself and made sure I wouldn't have the courage to join the 600K ride. I'll miss out on the fun of the Audax 600 but I had lots of memories to cherish from this one single ride called Audax 400. Congratulations to all the finishers/participants and organizers. Mabuhay!
No comments:
Email ThisBlogThis!Share to TwitterShare to FacebookShare to Pinterest
Labels: Cycling

Taking A Time Off

When I started training for my first 10K run, it marked the start of my interest in all things endurance. I researched on endurance sports training, I structured my workouts, I did it safely short but consistent, and most of all, I trained with a purpose to get a little bit fitter time after time.

On my first year of training, not once did I stopped to abandon my 6 hour per week regimen. Sometimes the hours would go up and at times I would rest for a couple of days. But the consistency and devotion was there and luckily enough, progress showed on a lot of my races.

From a guy who can only jog for twelve minutes straight back in November 2011, I went on to clock 2:36 in a standard distance race in about a year. I don't know if this is a typical result but undeniably, consistent training made me a fitter person (... I think) and the good news is that you can easily be fitter than me if you have the time to allot to endurance training.

As time went on, I guess it's just ordinary to take some time off from what you're used to do and in this case, I found myself laying low from training just three times since I started my 10k training and the latest lull is happening now.

Since March 8 I only had casual rides, no swim and definitely no runs. As ridiculous as it sound, I'm liking this new change in my lifestyle. Actually I have to revise my goals for the whole year as I embrace my new found love for slacking off :P

I would imagine that running is the hardest thing to do right now. I have tons of reason to neither run nor jog. Swimming would be easier as I am always near a pool and it's low on the pain meter. Cycling ain't going anywhere, it's just so much fun to stop doing it but the rides don't resemble the ones I usually do when training for a triathlon. 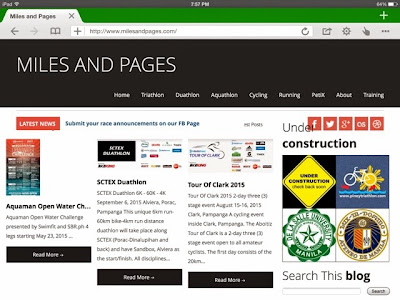 But there is a good thing that came out of the free time I have and it's an offshoot of this blog. You see, I don't normally post race schedules on this blog but continually update my FB page to share race updates available in the Philippines. Now I am setting up a site where anyone can easily find races and results in the world of multi sports in the Philippines. The site is called Miles and Pages for a reason, there you can find race schedules and blog posts from this site. The site address is www.milesandpages.com and it still is a work in progress and could take weeks to finish but it's up and running already. Hope you like it and find it useful in planning your races.

So what do you do when you're taking a time off? You do crazy things like planning to ride an Audax 400 - damn straight. :P
No comments:
Email ThisBlogThis!Share to TwitterShare to FacebookShare to Pinterest
Labels: training

Days before our annual Visita Iglesia ride we weren't yet sure with the route. The choice is between a ride on the mountains and a roll in the flats going to Batangas. We decided to go up but a few kilometers later we ended up going the other way. Yep we changed our minds a few minutes away from our first church. 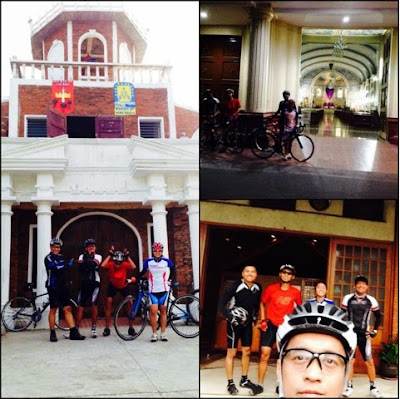 The ride was a successful century ride/birthday ride/Visita Iglesia. We visited 7 churches, ate twice courtesy of the celebrant and ended with a mileage a tad above 100 kilometers. 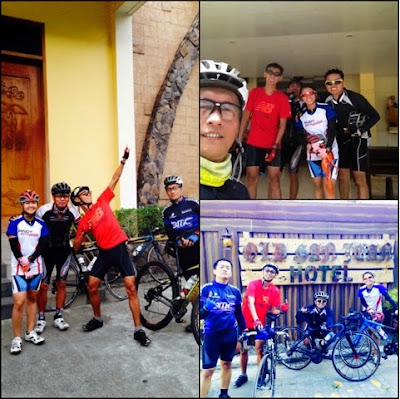 At the farthest distance from where we came from

This is a traditional ride which we used to call penitence ride but the degree of difficulty became easier as we progressed in fitness throughout the years so an exercise like this doesn't call for a name synonymous to suffering. 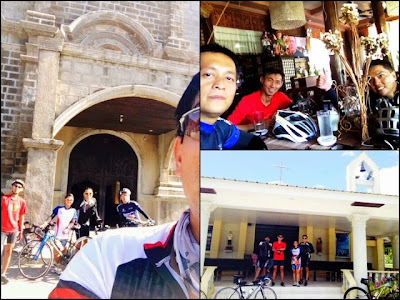 Breakfast at a Filipiniana styled restaurant 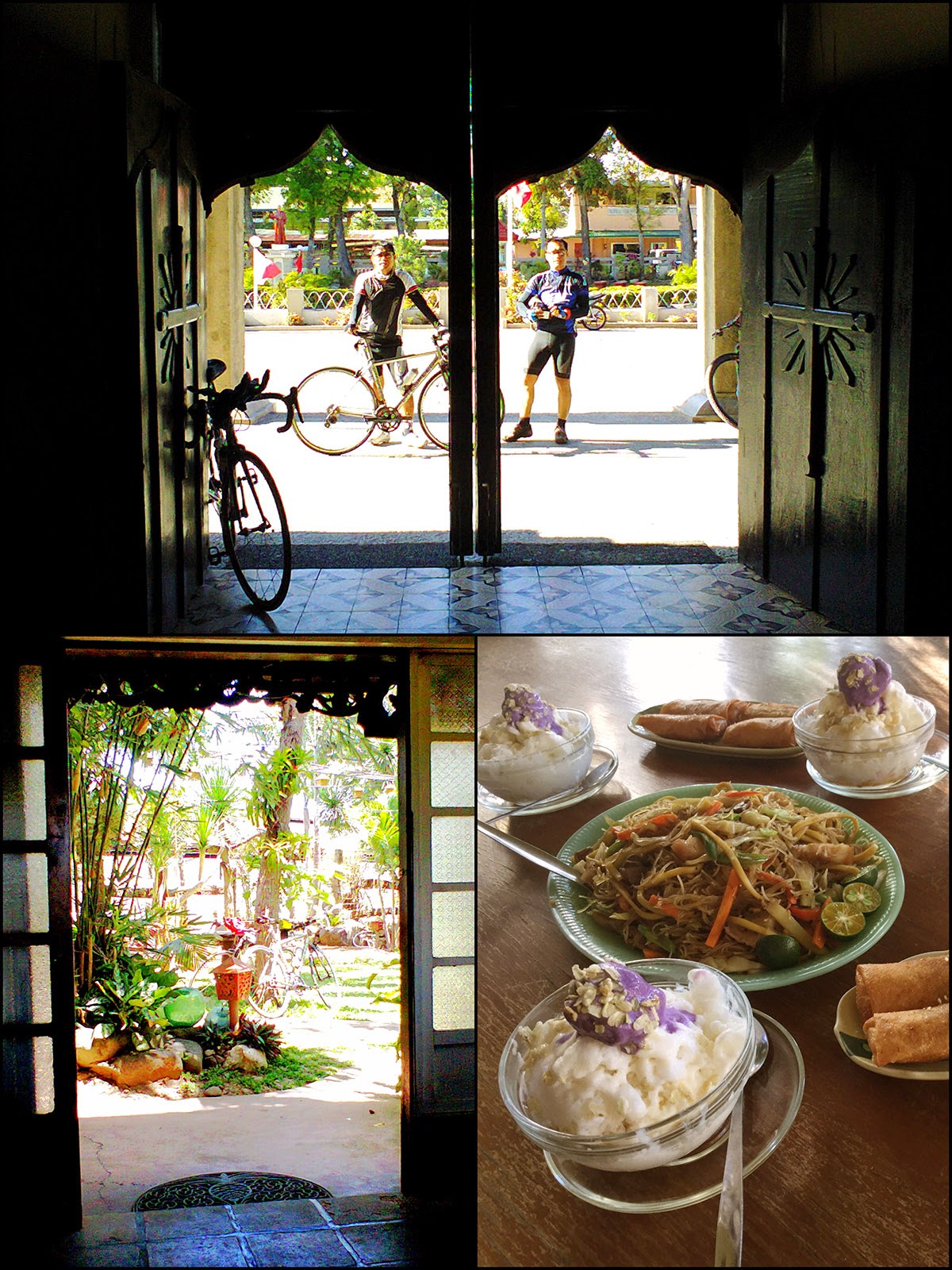 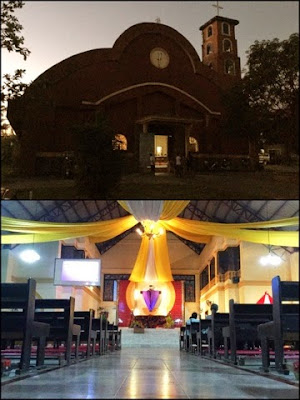 In the evening I brought my son to this place
No comments:
Email ThisBlogThis!Share to TwitterShare to FacebookShare to Pinterest
Labels: Cycling
Newer Posts Older Posts Home
Subscribe to: Posts (Atom)