It seems to me that we are now populated by runners, and real joggers are becoming extinct. With a variety of races and fun runs that abound, each giving away race numbers and medals, the running community continues to grow attracting weight watchers, fitness buffs and certified joggers. But as a jogger hear me out before you jump to that other fence.

Jogging is definitely easier than running. It is also easier to maintain good fitness based on jogging because it doesn't need structure. Running requires dedication, progression, hard and long workouts. Jogging, on the other hand, demands nothing but a fraction of your time at an easy pace which wouldn't break knees or back.

So how do you jog? Just jog for 20 to 40 minutes 3 times a week. It can be done every other day or on 3 consecutive days and you won't feel guilty that they are all bunched up or you've been short on mileage, you just do it and that's it. I think the health benefits of jogging is just just as good as any endurance sport and it's bottled in less than 2 hours per week. But then there's also walking which is a good exercise but definitely not as good as jogging and it doesn't make you as awesome as a jogger. 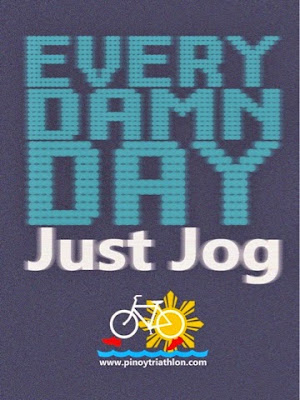 No comments:
Email ThisBlogThis!Share to TwitterShare to FacebookShare to Pinterest
Labels: running

When the race date for Century Tuna Ironman 70.3 Subic Bay was announced I was already registered at Challenge Philippines and they were just 2 weeks apart so I was hesitant to secure a spot for this March 8 event. But I just thought it was too good to pass up and ended up using my credit card. 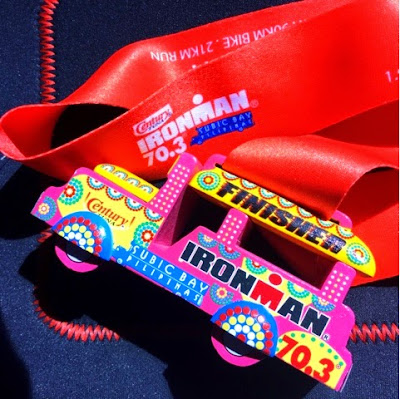 Last year I was busy training for Bohol 226, an event that didn't push through, so it goes without saying that I had a fair amount of base fitness in me. I stopped doing workouts as soon as it was canceled though. I was about to start training in January but I had a minor accident and felt it would be foolish to risk the injuries that were sustained so the workouts didn't come until the first week of February, 2015. I had three weeks for Challenge and two more weeks for Ironman 70.3 Subic to condition myself.

I was on the third wave out of four. Five minutes separated from the second wave, the horn or gun (didn't remember what they used) sounded for us. I tried a bit harder than usual to vie for a good position so I wouldn't get caught up in a frantic washing machine start. I guess I did well but right after the first turn I saw some red swim caps, o oh the caps worn by the previous wave, and decided to swim further from the buoy line to avoid congestion. My shoulders were fatigued early on because I was trying too hard. The swim course layout was an 'L' shape but I didn't see it that way during the swim. I got out of the water in 34 minutes. Yehey! 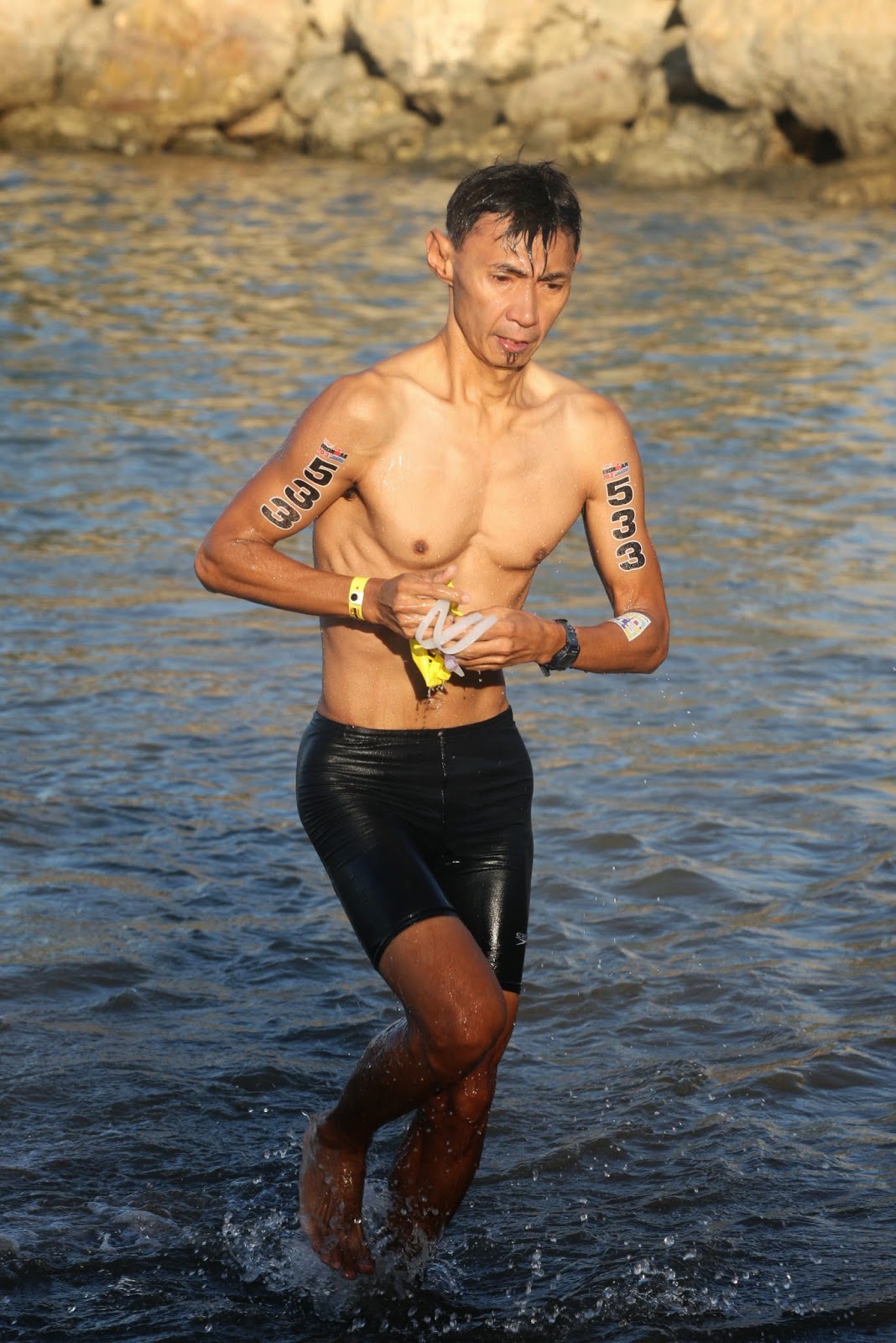 This is an interesting run towards transition area for the sheer distance between Dungaree Beach and the airport tarmac where T1 was located. It's definitely the longest I've experienced. As usual I put on my cycling shorts, a not so tight muscle shirt, race belt, cellphone and off I went. 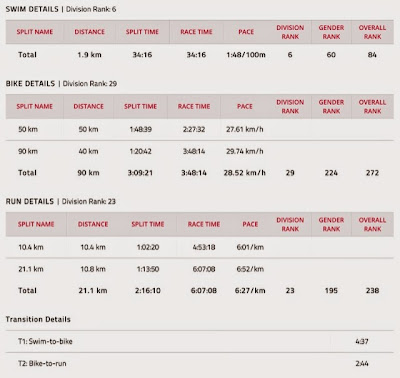 Now that the easy part was through I was hoping for a better bike leg than what I went trough in  Challenge PH. The plan was to count the number of riders who will pass me along the bike course and that number would be the target number of runners I intended to overtake during the run. But there was just too many people passing me since kilometer 1 that I despised counting and stopped altogether. The hydration stations offered Gatorade and water and they're handing it over to moving and non-moving riders. I almost had a bump in with a participant as someone in front of me totally stopped. It was windy in the tollway, where the beauty of the race course was at its finest. I saw the mountains on my left side smoking... yeah people were burning some trees out there. It was over in 3 hours 9 minutes with my legs still intact but barely.

It was coincidence that the numbers 532 and 534 (me=533) were also in T2 so I was sandwiched while prepping for the run. I was hurrying for no reason at all, I guess it's the nature of the race where one tries to get a better time even if you're far out of the field. I didn't forget to change to my running shirt this time... hmmm I'm getting good at transitions. On to the heated pavement: The run course. 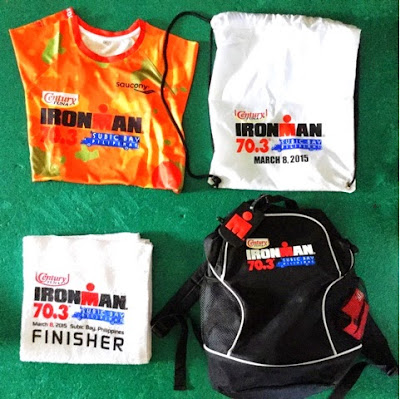 I was weighing my two options, to jog or to run. If I chose the latter I run the risk of not finishing the race so I went for option number 1, I jogged and it was the right call. After a few kilometers I could feel my left ITB acting up, it was my concern when I was just starting triathlon a couple of years ago. It wouldn't shut up and as the kilometers piled up the pain worsened. It was really, really HOT out there good thing that ice chips were all over the hydration stations even on the way back there were no limit as to how much ice they're willing to give. I've put those ice chips everywhere, in my shirt, on my hair, my mini towel, in my mouth, heck even in my Speedo. The run split was 2:16 and finishing time was 6:07, and I don't remember if I smiled for the camera at the moment. I got my finisher's medal and went for an outdoor shower. Ahh.. LIFE is good.

The Good: the route is an easy course in the familiar triathlon ground that is Subic
The Bad: my legs couldn't stand the test of a 70.3 for a nice run
The Ugly: nothing went ugly even when my ITBS struck it wasn't ugly ugly.. but the porta-potties in Dungaree Beach were too few i think
The Race: Century Tuna brought Ironman 70.3 nearer to me, the expo looked like an EXPO
The Time: 6 hours 35 minutes = the average time of Age Group 45-49 Male
The Best: this is the only race where no one cut the course - said the head timer
The Lesson: just keep on moving
No comments:
Email ThisBlogThis!Share to TwitterShare to FacebookShare to Pinterest
Labels: triathlon

clockwise:
1- Depart from house at exactly 5:38 a.m.
2- North Luzon Expressway
3- Restaurant at NLEX
4- Arrival at Subic via this tunnel 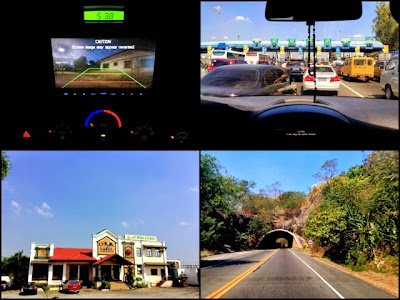 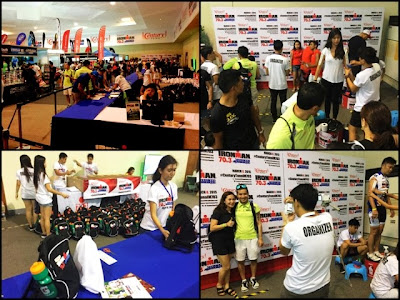 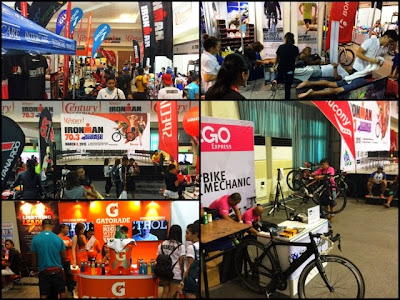 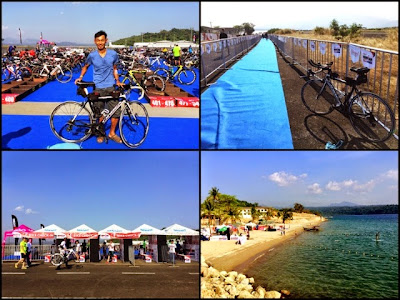 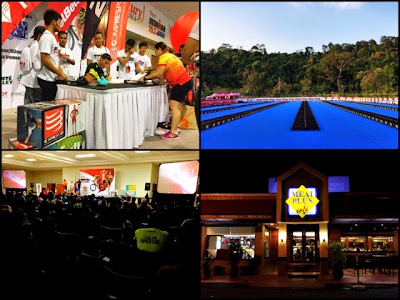 Some things not in the photos:
1- I lost my T2 bag so I had to ask for a replacement
2- I had a massage before going to sleep
3- The body marking came with Age Group marking
4- The bag of loots was the HEAVIEST I've seen
5- I bought my race nutrition at Bread Talk
No comments:
Email ThisBlogThis!Share to TwitterShare to FacebookShare to Pinterest
Labels: triathlon

You only do what you can Do

After struggling in Challenge PH last week I spent the post race week without a single run to rest my frail body but obviously I have to prepare for Subic IM70.3 in two week's time so I just did what I could - hit the pool, rode the bike and played some classic PS4 games. ;)

I also replaced the mtb crankset on my road bike with the old 105 double compact. I found that the mtb cranks were harder to tune with the road cogs (the chains would sometimes get caught between the plates and I always found myself riding with cross chain.

I didn't get my usual long rides, long runs and long swims ten days prior to an event but I'm pretty much confident that the half distance race last February 21 helped me to prepare for IM70.3. With less than a week before the next race I can only hope that I could run three times before the race weekend.

Last Saturday I wasn't able to do key workouts because I had to go to the open house of the School of Humanities and see if my daughter would like it. After hearing from and talking to the professors of the Department of Philosophy and Department of Fine Arts my lady decided to enroll in Ateneo (Creative Writing and Information Design) and not in my green Alma Mater (LIA-COM, Literature and Advertisement), and also not in UST (BS- Pharmacy to pursue Medicine - something that I kept suggesting her). I am so proud that she gets to choose to pursue her passion in a good school even if it means she'll be cheering for the Eagles and me for the Archers come UAAP basketball season. ANIMO! 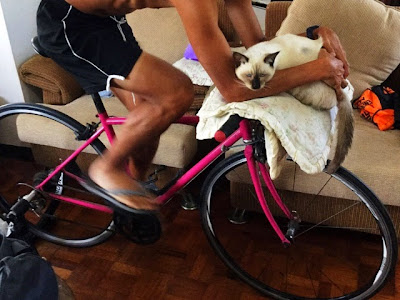 the cat inspires me to do some time on the trainer 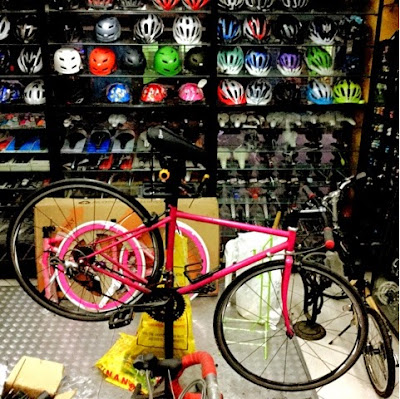 the flat bar has to go away... back with the drop bar 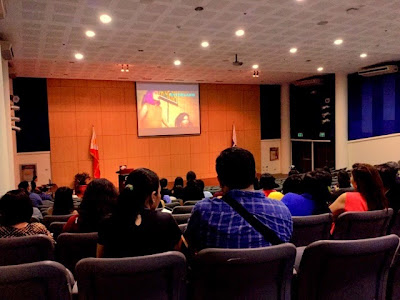 School Of Humanities - PROCEED WITH PASSION 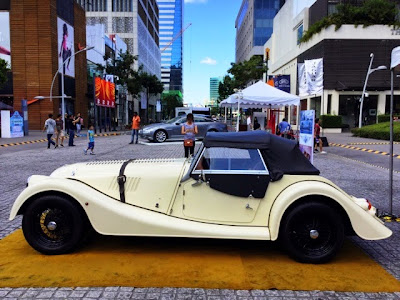 I love art and this one just looks awesome 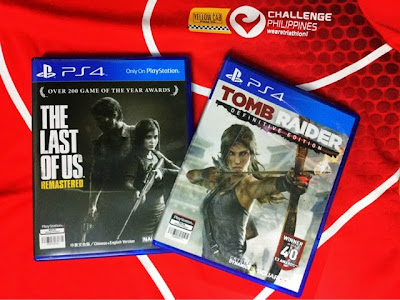 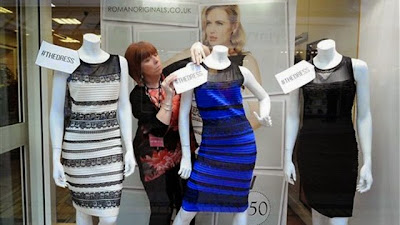 the dress that got the netizens talking - the blue and black in the middle ... NO gold and white, right?