Are you familiar with our local duathlon events? Well, they come in a variety of distances from newbie friendly 6K-30K-3K to a standard distance 10K-40K-5K distance in the format of run-bike-run. Active Health Duathlon is a 6K-60K-4K bike heavy event and this one, the Duaman X2 with its 12K-40K-6K distance is biased towards a strong runner than a biker.

I parked the car a little bit far from the transition area, I biked towards the registration tent and got my race packet and went back to the car to prep the stickers, race belt and my transition basket. It was still dark but the dawn was breaking and the transition area was about to get filled with an assortment of bikes from folding bikes to triathlon bikes.

Race briefing followed, Carlos the organizer explained it well then repeated the instructions sensing that a lot of participants were beginners. I went to the portalet for a last minute break then went back and glad to be starting at the front as the porta-potties were just in front of the starting line.

As the gun went off I immediately pushed the button on my stop watch and ran as soon as I saw it ticking. The first 300 meters was a blur, a race towards the rotunda which served as the landmark for our turnaround point. We had to do 4 loops and it was the end point. First loop went fast as I finished it in under 11 minutes. I got to the transition area in less than 45 minutes and quickly toweled and changed clothes. 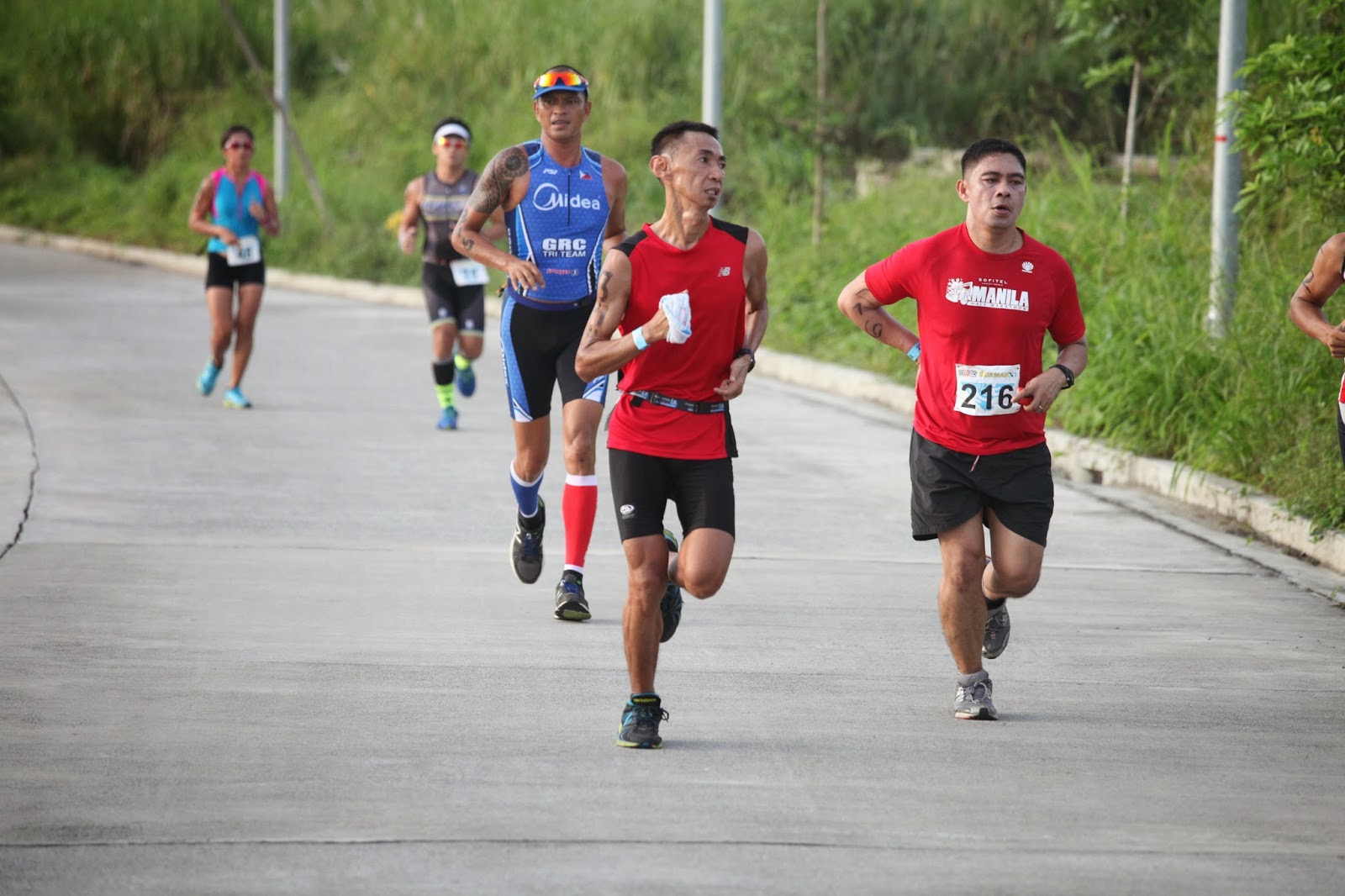 Lapping Some Runners On My Way To Transition Area

I never saw someone from my age group overtook me so I guessed I was leading at that point. I started the bike in excellent condition, no back pain or heavy legs. The route was wide and rolling where in some parts I felt the might of the wind. I was praying for a trouble free ride and it was really fuss free but as usual I lost steam at some point and this time it was at kilometer 25 of the bike leg, I felt some weakness from my legs and the numbers on my cyclocomputer just dropped. I was just cruising from that point on when suddenly I saw someone with a race number close to mine pass me with still a few kilometers to transition 2. I pedaled hard to get closer to him as much as possible but he still got away, oh well. 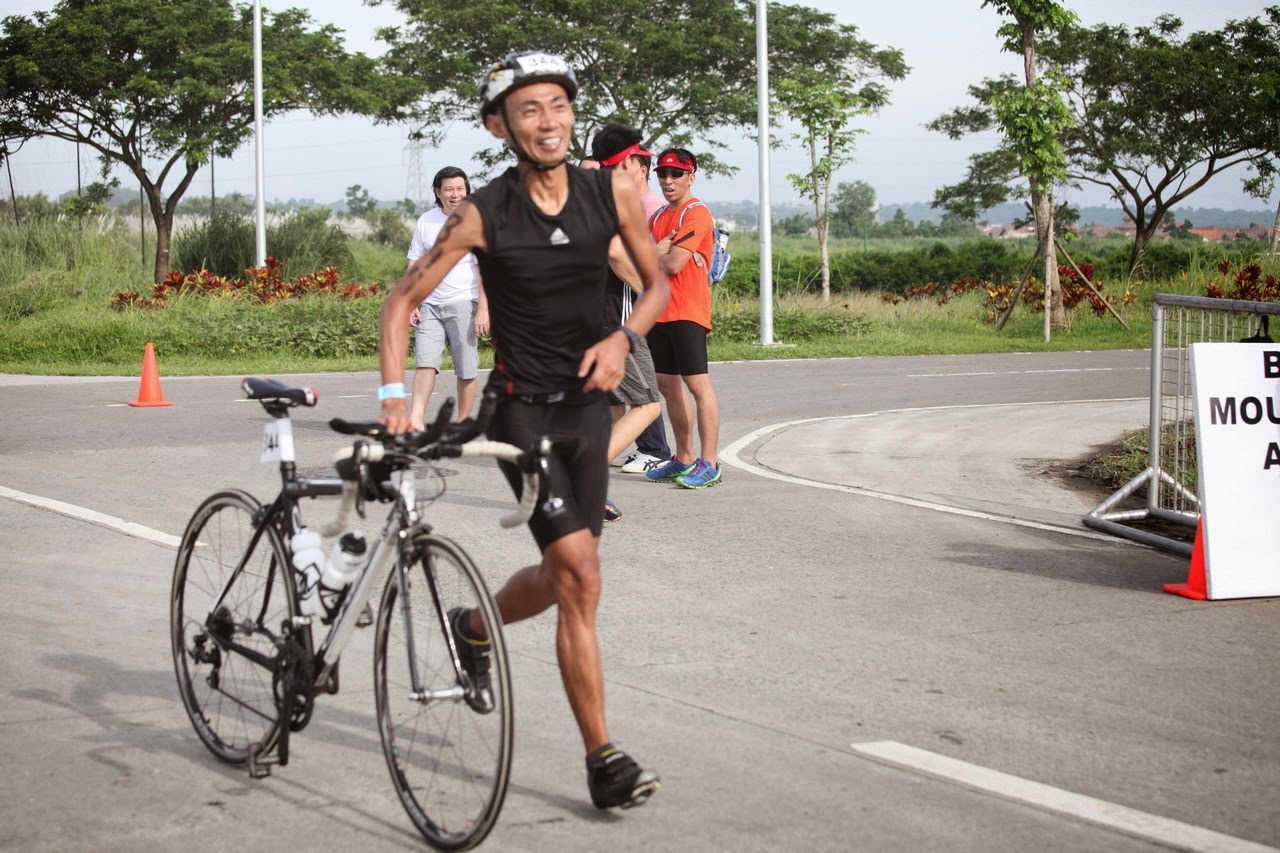 Looking for my Bike Rack

I came to T2 a few seconds later than the man who overtook me and run with my cycling shoes then I just took it off and went looking for my transition area with only my socks. I went a few meters off my bike rack and went back and still missed my bike rack 'what the ...haha'. My rack number was covered by my shirt - toinks. 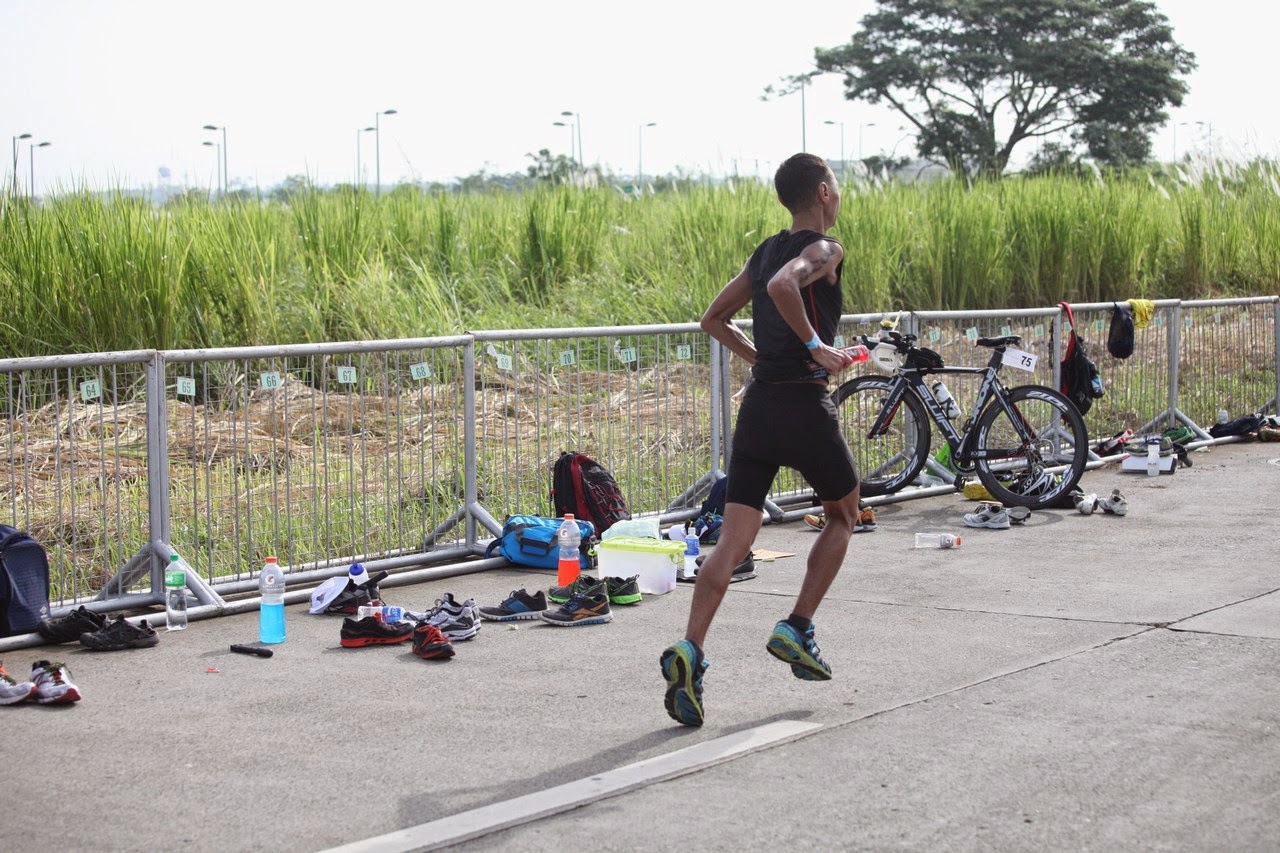 Off to Chase some Runners after T2

As soon as I started running for the last 2 loops, I saw familiar faces from the first run. They were the ones I ran shoulder to shoulder with earlier in the race but now at a slower pace. I overtook them easily and ran hard until I was about to pass a participant who was 1 lap ahead of me told me "you have no opponent". To my delight I eased and enjoyed the rest of the race. 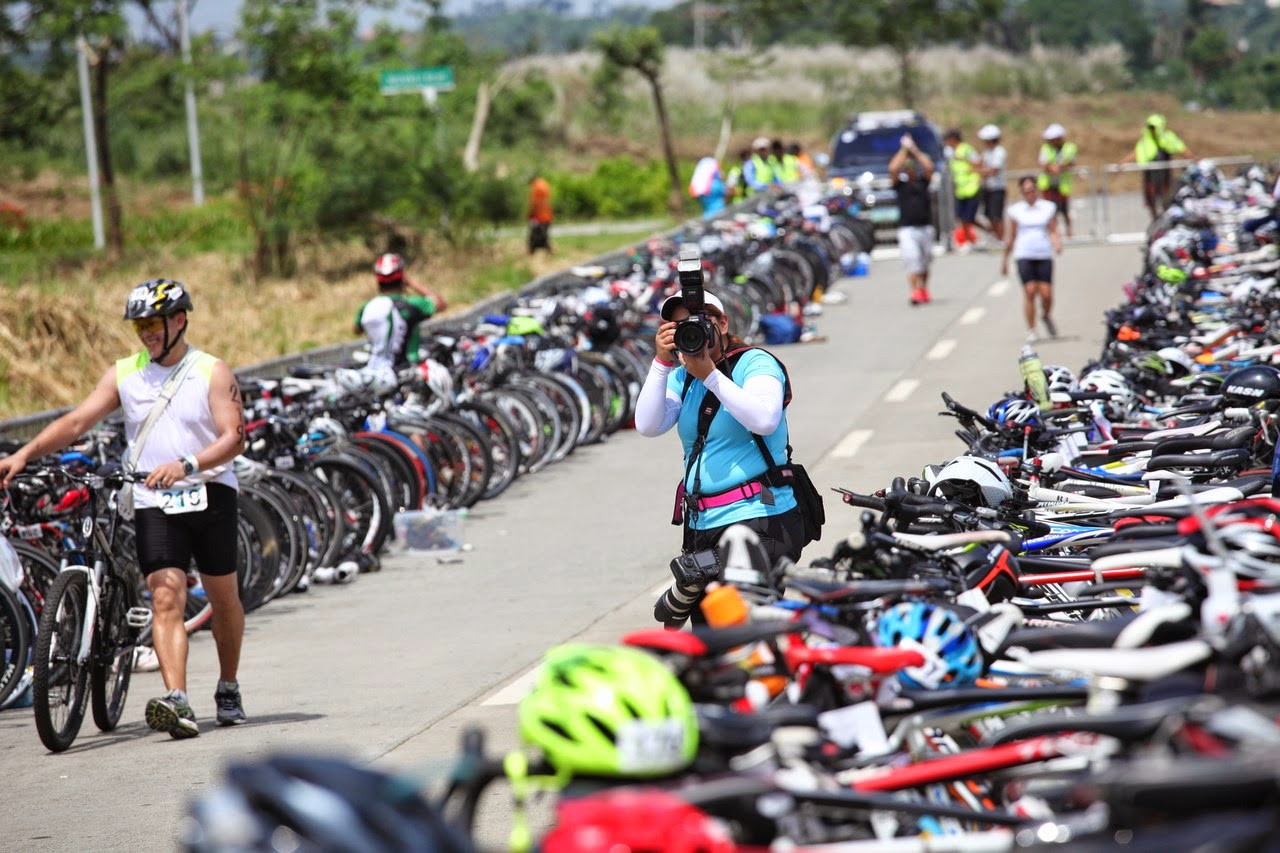 I finished in 2:30 and for the first time I won a multisport race... with 85 percent of the participants were newbies hehe - as told by the organizer. My teammate Nerozel placed 2nd in her age group despite starting the race 8 minutes late whoa! 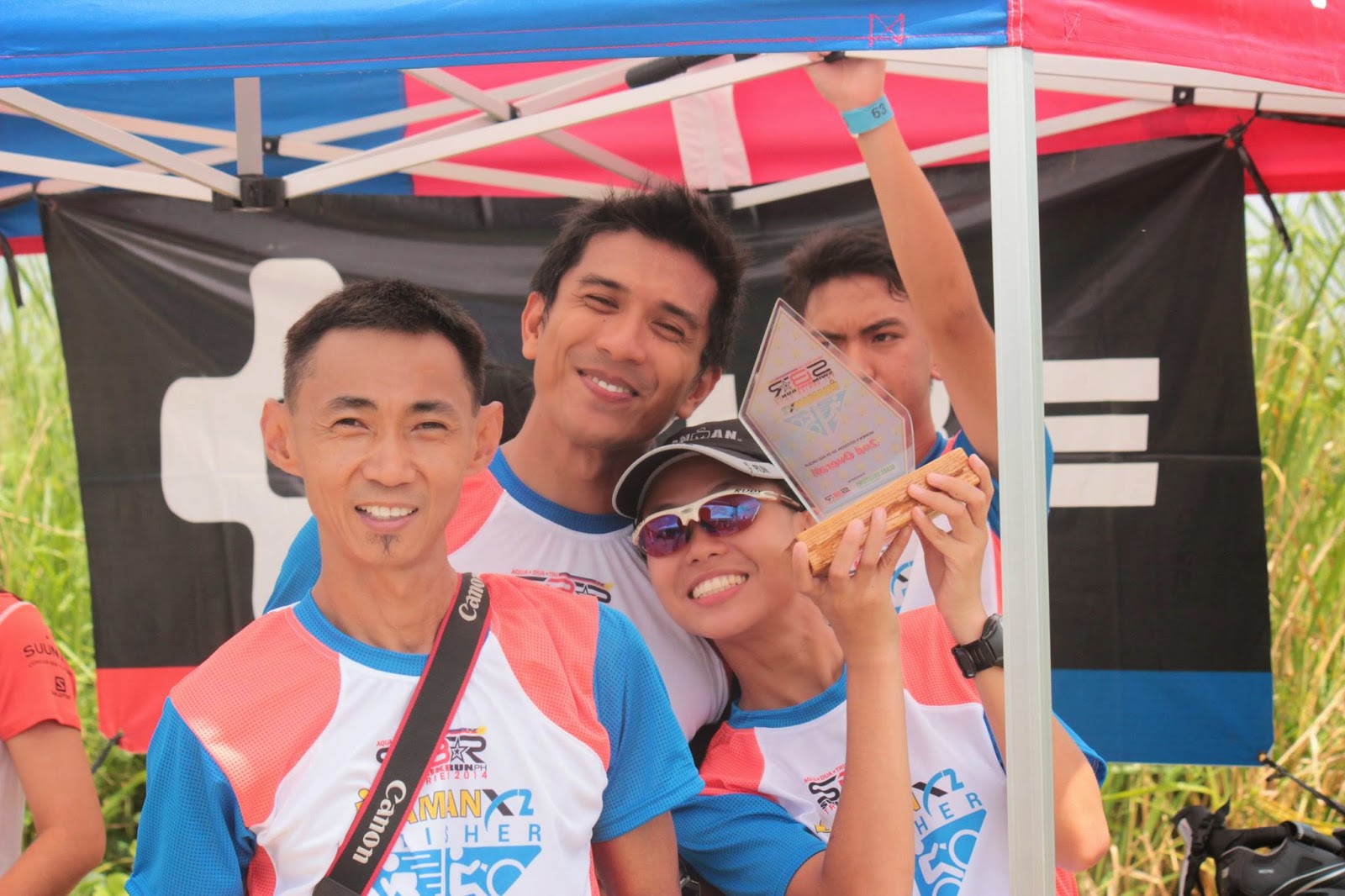 The event was fun in a painful way :P , the bike course was nice, the weather was perfect, the souvenir shirt was bright and comfy and... I won. It might not happen again but I was sure glad that I joined Duaman X2.
Email ThisBlogThis!Share to TwitterShare to FacebookShare to Pinterest
Labels: Duathlon, Philippines