I initially had interest to run this race with the intent to qualify for the Milo Marathon Finals on December 7, 2014. But things changed since I registered for Bohol 226 Triathlon to be held on the same weekend. I had several goals for the race - blister-free run, don't get injured, don't get a side stitch and finish in 1:38 or faster.

I woke up a bit late but still had enough time to catch the gun start at a local mall but had no time for my pre-race rituals and had to start at the back. When the gun went off I was busy setting up my stop watch, I couldn't see the digits so I had to stop and look if it's working or not then I saw the seconds tick from 37 to 38, I was glad it's working but lost some dear seconds out there, fortunately there were less than 300 runners so the road was wide enough to pass and be passed.

It was dark at the first 6 kilometers of the route with lights few and far between. I didn't settle into a particular pace because I couldn't see the numbers on my watch - I guess my eyes were failing me that time or some senior moments creeping in.

By kilometer 8 I felt blisters on my feet and decided to change my foot strike to ease it a bit by avoiding that part of my sole. I thought that could be the end of my run but I just went on and after 12 kilometers I felt really cold due to wearing the official singlet soaked in my own sweat. Yaiks! I never thought this could be a problem but it was nasty, I am thin so I should have expected this where others fear the heat I fall to low temp issues. I envy those who had the courage to not use the official singlet, I really really thought it was stated that we should wear the official singlets, oh well.. don't even know if it's gonna work though.

At kilometer 15 I thought my time was due for a 1:34 finish, at kilometer 18 I was determined to up the pace a bit more so I run harder then 1.5 kilometers to the finish line I relaxed and met a steep uphill portion and lost some time then woke up when some runners were catching me. By this time all I wanted to see was the shopping mall. I finished in 1:38 and standing! Don't know if it was fast but for some jogger like me it's a miracle :). 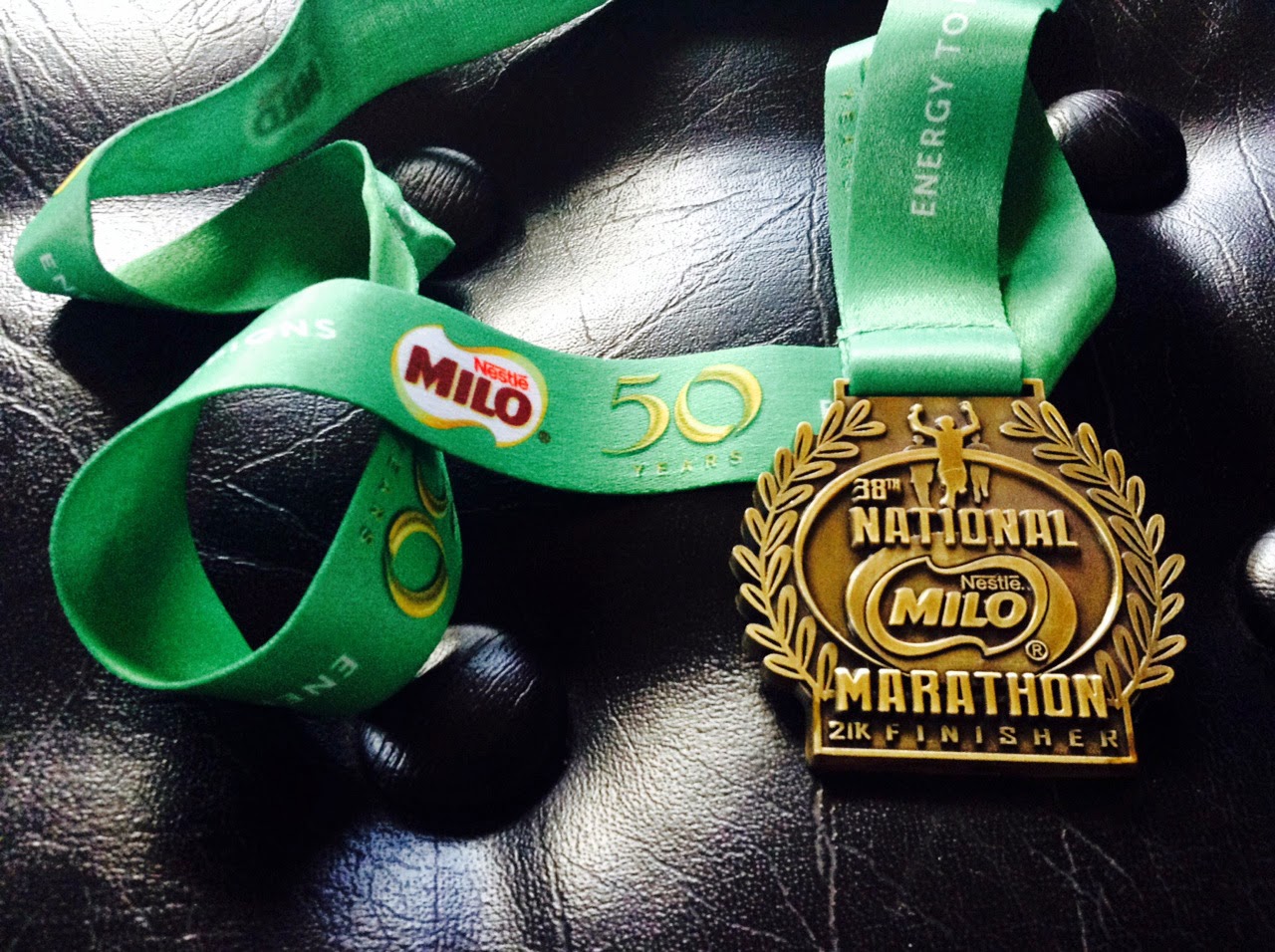 So what were the goals again - except for the blisters particularly on my right foot I reached my lofty goals haha.

The first and second finishers clocked in at 1:12 and I think it's unbelievable in this part of the globe ;P.

By the way the hydration stations were enough, the loot bag contained more Milo products, and everywhere I looked, I saw green.
Email ThisBlogThis!Share to TwitterShare to FacebookShare to Pinterest
Labels: running