Have you ever thought about a zombie apocalypse actually happening? Imagine yourself running for your life with a gun in your hand and then horde of zombies suddenly appeared in front of you. You have been ambushed by zombies (those sneaky bastards)  and you only have three bullets with you. Will you run? Or will you die with honor  getting eaten by zombies? Hold on to that thought while I share to you my experience being chased by zombies. Zombies who are hungry for your flags (yes, it does suck that they’re not after your brains) 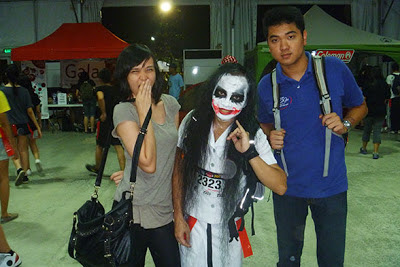 A participant in a scary costume

Okay, so I registered for this fun run. Quick question, is Outbreak Manila a ‘Fun Run’? well in my opinion it is not. Because you walk, run from zombies who are in the way, then walk again if you get tired or something (well at least that was what I saw most people were doing). But let’s call it a Fun Run because it is indeed fun.

This time, Outbreak Manila was held in Enchanted Kingdom. A Amusement Park. or Theme Park if you prefer calling it that. The thought reminds me of a computer game I play. Where there are zombies and your goal is to survive. There’s  this level  that’s in the Circus. The sound effects seriously creep me out. And the clown in the game! Don’t get me started with the clown.

So back to the run, We arrived at Enchanted Kingdom at about 6:00 in the evening. It is said that we should arrive an hour before our gun start. This run has tons of waves. I’m in wave 4 so I get to finish early. Too bad the zombies are still full of energy at that time.

At the starting line, We are separated into three courses per wave. The appetizer, The Main Course and The Dessert. Few people go into the line Appetizer/Dessert. They like to be the Main Course, which is hot and crowded. Trust me, I know because I experienced it first hand. 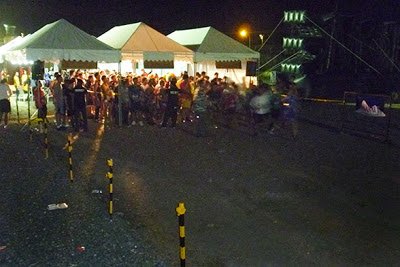 This, is where we started running for our lives

So after the gun was shot (or the sound that makes us go forward in races) we’re supposed to run in, like a field where zombies are scattered. It’s like the zombies are playing patintero with you. When you reach the entrance, you can see that the zombies are blocking the way inside. So it’s good to stick with crowds. 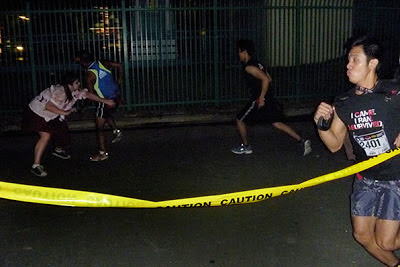 These zombies are really hungry for flags

When you get pass the entrance. That’s where the fun starts. But unfortunately, the fun ends quickly because when you’re out of life flags, zombies won’t even bother to look at you. So you’ll get to walk freely at EK with no zombies bothering you, which is boring. So thank goodness for white flags! It saves you from boredom. Because flags = zombies running after you 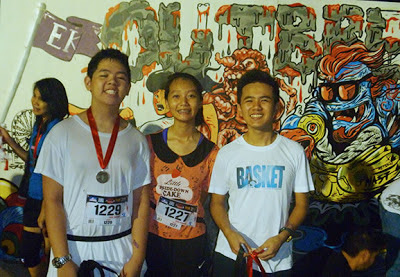 HolaSamuel and her cousins after 50 minutes inside the park
Email ThisBlogThis!Share to TwitterShare to FacebookShare to Pinterest
Labels: running