Yep. This is really a report of my dad’s race. Sorry if I’m kinda late, it’s our finals week anyway.

Woke up at 4 in the morning. Didn’t even bother to shower or anything, just switched my pajamas for trousers (look! I just used the word trousers!). Dragged myself out of bed and went to the car to sleep again. 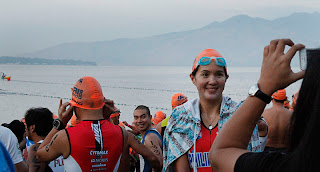 Woke up at 5:38 AM to find that I’m already at Dungaree Beach (The venue for the race). Slept again.

Woke up again at 6:39 AM to find my mother shaking me from my dream about creepy Japanese horrors. Found out that I missed the start of swimming but that’s alright cause the fee for entering the beach is way expensive if you’re only going to watch the race. It’s 200 pesos by the way.

Racking up the bike at Transition Area

Waited beside the transition area so I can get a picture of my father basking in his own awesomeness ;)

Oh I almost forgot, I saw Melai of PBB there. Ambushing triathletes with “HEY!” just like Jennifer Lawrence in The Silver Linings Playbook. I even passed by Erwan Heussaff. But don’t worry, I didn’t go snapping pictures of him like a mad man. I kept my cool and discreetly took a picture of him.

Matteo Guidicelli being interviewed after the swim

Waited some more and there he is. My father. Basking in the glory of his awesomeness.

I ran to the finish line when I saw my dad starting to run. So you know, I’ll be able to take a picture of his finale.

The sun was shining down on us and it was crammed over there so I can’t help but feel annoyed because I despise the hot weather. I prefer the weather of London. Even though I haven’t experienced it first hand, I just know okay?

After waiting for a long time --of course it’s a long time, it’s 10 kilometers guys!-- my dad finally came and he didn’t even show mercy on the guy in front of him.

With a time of 2:37 Paps placed twelfth in his age group. 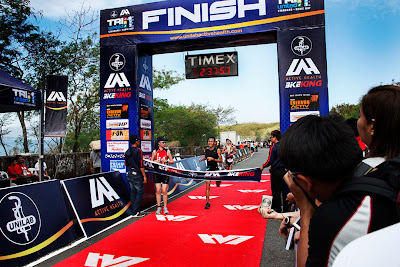 Route:  The venue was moved from Laiya, San Juan, Batangas to Subic Bay Freeport.  The swim at Dungaree Beach was a nice starting point, the bike route was relatively flat along a scenic seaside drive and the run route was an easy 10k beside the airport with the bay as our view.

Cheering:  Triathlon is usually a big family event where members cheer for the participants and teammates and this was no different but the addition of the presence of ABS-CBN talent Melai holding the mike, it’s really crazy fun out there.

Marshals:  There were enough at every key area. 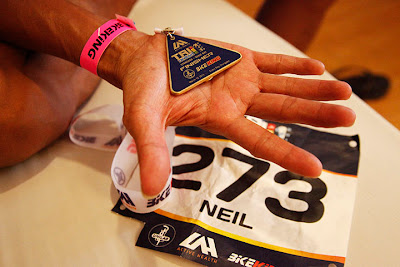 The pink band was worn after claiming the race kit, medal is TRIangular :D

The Bad:  My heartfelt sympathy and prayers to Mr. Raymond Cruz and his family.  I was taking pictures of my dad at the transition area when the ambulance was called and it sped in front of us.
Email ThisBlogThis!Share to TwitterShare to FacebookShare to Pinterest
Labels: triathlon