draft
First, I would like to thank all of you who dropped by my blog site and secondly, thanks also for joining me on FB as you can see I have more entries on FB since I can share things which can't be found on this site.

Here we are again, beginning of the year, trying to set some goals to work for. December of 2014 was pretty much 'goalless' and uneventful as far as fitness is concerned. I thought that as the new year enters I would suddenly have the urge to train but that wasn't the case, I am still the guy from December who wouldn't go out and ride. So to make it interesting I am here to state some lofty goals of my own for 2015. With some stretch goals in mind I might force myself out of hibernation. 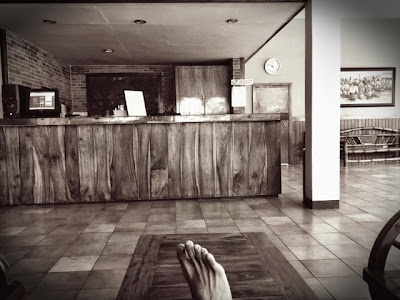 Well here I am typing on my iPad ;P

Swim - if only I could swim at least once a week that would be great. This seems to be an easy task but looking back I know this would be difficult. There are few things that make this tough but mainly because I don't swim when I feel it's cold even if the pool is not.

Bike - to be confident that I can finish an Audax 400 or Audax 600 in April or May. As you probably know by now, I'm a slow biker something that's uncharacteristic for someone so light. My injuries from the past kept me from doing hard pedaling and at times it sidelined me for some time. But that doesn't mean I couldn't try a long adventure ride.

Run - to cover 10 kilometers in under forty minutes. If a am in my twenties or thirties I think this wouldn't be a stretch but now it definitely is. They say at my age one can run a 10K in 38 minutes although I know I wouldn't be able to touch that I think I have a shot at sub 40 at around September and October.

Triathlon - I think I won't be doing much of triathlon this year but still I have two triathlons that was scheduled just a few weeks apart (Challenge 70.3 on February 22 and IM 70.3 on March 8) and it's hard to believe that I am not working my ass off considering how close they are at the moment. The goal... if it weren't for my toes dropping my nails right now I would blurt out some unrealistic time to target but the truth is I really have my toes on a bit of a bind so finishing is as high as I can aim.

Blogging - my goal is to have at least eight entries per month and continue to update my Facebook page.

So there goes my goals for this year. I hope you can also state some of your goals and help you in attaining a fitter you. Cheers to us!
Email ThisBlogThis!Share to TwitterShare to FacebookShare to Pinterest
Labels: triathlon