The Place
Pico de Loro Cove is nice, it's got a long beach with mountains on either side. The cove is pronounced on both sides extending quite far from the shoreline. With modern facilities situated on the the beach it is quite easy to pamper yourself. The ballroom area where registration and briefing would take place is a little bit far from the beach though. I parked near the beach/starting line and walked along the pathways surrounding a lagoon with hotels and condominiums lining up around it. The pathway is part of the run course and walking on it going to the registration area was a good way for me to gauge how hard or easy it's gonna be later in the afternoon. With its lush greenery around the lagoon, calm is everywhere. Peace in the midst of racing; this is gonna feel awesome. 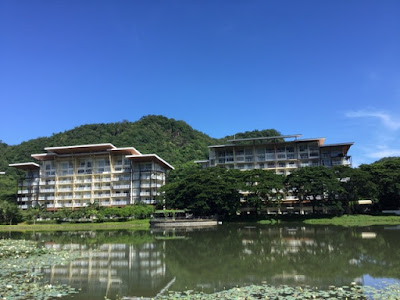 The Registration
Right outside the ballroom is an airconditioned, carpeted waiting area devoted for race pack claiming and booths from some of the well known brands in triathlon. I received a red transition bag, race numbers and stickers, timing chip, and a red souvenir shirt. But of course I still have to race to get that finisher's medal bleh.

The Lunch
We had lunch on a tent right beside the finish line. It was hot but convenient. It's in a place sandwiched by a beautiful beach in front and a lagoon and mountains at the back. Ah life is good. 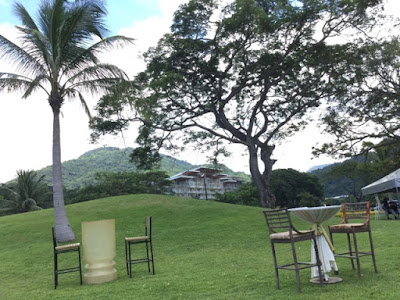 The Briefing
After having lunch I rode on a shuttle car going to the ballroom for the race briefing. It was already under way and heard some good tips from the speaker regarding the approach on the race course. This is an afternoon race and one of the benefits is the time to prepare is more relaxed especially for that one last visit to the toilet for race day jitters. The ballroom area is the best place I've seen in a triathlon toilet bar none hah! 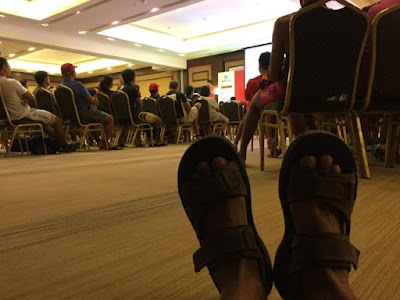 The Race
To tell you the truth just by looking at the startlist I was hoping for a podium finish but days before the race I got sick and quite frankly I didn't know what to expect but my ego was still hopeful. The strategy was to go hard on the swim, relax on the bike and run the fastest towards the finish line. I prepared hard for the swim and run and my time trial on both disciplines were actually excellent before I got sick so it wouldn't be a sin to hope for the best right? When it all started it just didn't seem right, the swim took more effort and the second loop was slower even if the field was already thin at that point. I wasn't huffing and puffing but I was tiring going to transition 1. The plan wasn't happening ;( and on the bike course I was able to watch how the gap became larger with each turnaround and the stop watch was ticking way faster than I could imagine. On the run course I was already walking on some parts of the route just to catch my breath. I was 6th in my age group and the third placer was a good 3 minutes ahead of me. Looking back there was really nothing I could do to change the outcome, I was tired and I played the part. Worst thing..? I got a fever after it was over luckily I bought some medicines with me. 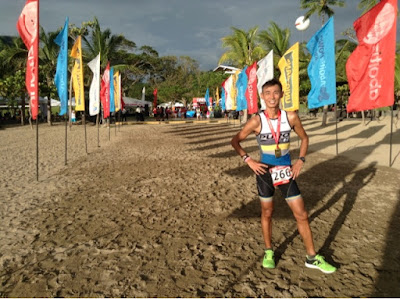 The Thoughts
The field was small and I liked it that way. There were lots of official photographers on the the race course. The place is paradise everyone would enjoy playing in it. The steep uphill on the bike course was challenging. The run around the lagoon made me appreciate the sport even more. Would I recommend Aboitiz Tri? Wouldn't you? 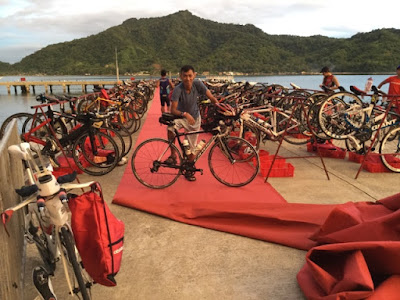