The first leg of the National Age Group Triathlon kicked off at Subic Bay Freeport on February 5, 2012. It was my first standard distance race (1.5k swim, 40k bike and 10k run) and first open water swim. I felt a bunch of nerves when I saw the gorgeous swim venue the day before the race. My driver said 'a a bossing ang layo, lalanguyin mo po ba yan?' and I told him 'oo dalawang beses nga eh'. It was a 750 meter loop so we have to swim it twice.

At about 4 pm that Saturday afternoon I along with my daughter and nephew who will also race in the mini sprint category went to Subic International Hotel to get our race packets. Then my daughter wanted to have a bike ride so we went back to our hotel and hopped on our bikes to have a short 8k ride. After that I knew that she can finish her race despite her lack of bike training. 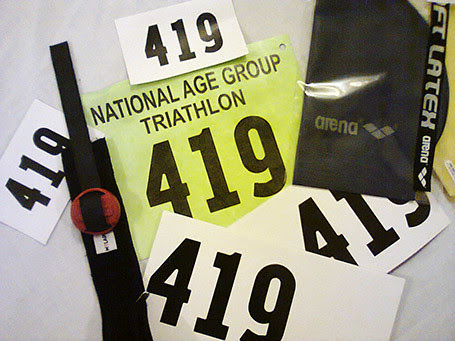 On race day we got to Dungaree Beach before 5am, proceeded to body marking and checked our bikes in the transition area. The place was too dark except for the transition area. After sticking my number to the bike I checked the timing chip on my ankle and heard my girl calling for my help. She can't find her race number so we searched frantically for my driver and eventually found it inside the car. I heard the organizer blurted out on the microphone that they were waiting for sunrise before they could start the race. 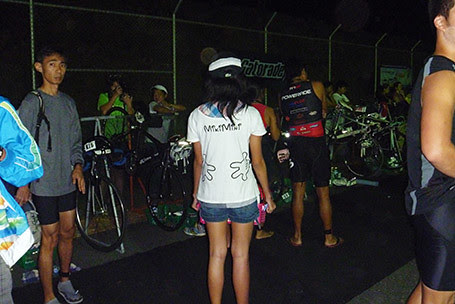 It's too dark in the transition area

Swim
My daughter and nephew belonged to the first wave and male age groupers like me were on the last wave. I was hesitant to start in front so I joined my buddy at the back and let a hundred men swim first before taking the plunge. It was a big mistake as overtaking in the water would take a toll in my pacing strategy. Anyway it was over in about 30 minutes and I was off to the transition area. They provided a fresh water shower along the path to the bikes and I just took a quick wash of my hair. 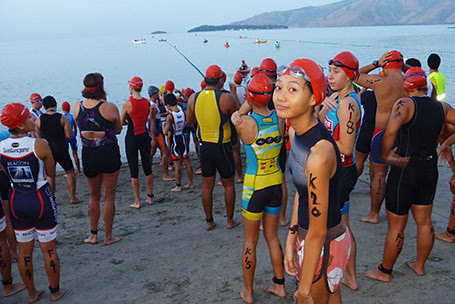 Transition 1
Without having a trisuit it was a disaster in T1. The water bottle that i was about to use to clean my feet were still sealed. I put on my shoes before my cycling shorts, it was too tight and I almost fell. I forgot to put on my number belt and the whole thing felt simply too long. 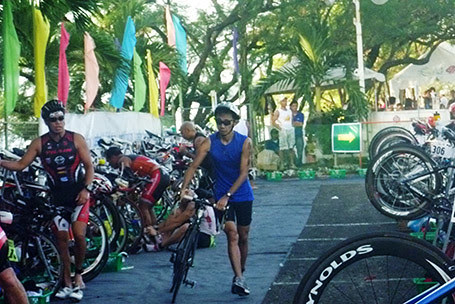 After spending too much time in T1

Bike
The 40k bike route was awesome. The first few kilometers brought us to the jungle like hills of Subic and after that we're coasting along the seaside highway. It was 2 loops of 20k each. My wife and mom got the chance to see me in action as I pass by our hotel. Unfortunately I was among the slowest riders out there and as I pedaled hard and enjoyed the scenery, I watched a lot of triathletes pass me by. With an average speed of 27.1 kph my bike ride was over at exactly 1:28:33.

Transition 2
I was already wearing my New Balance running shoes during the bike leg so it didn't took me long before I started running.

Run
Holding on to my cellphone and water bottle I started the run by the seawall with a moderate pace. At approximately 2 kilometers out my legs were already hurting from the side. The dreaded brick effect from coming off a vigorous bike ride punished both of my legs. 'Laspag sa bike' was what they said about my trauma. I was expecting a 55 minute run split but could only muster 1:03. Still, I felt pretty much lucky to finish the race intact, no accidents and no jellyfish stings. 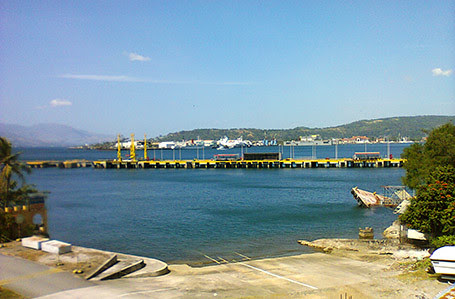 View from our room

My nephew finished third in his category, my daughter ...well let's just say she finished strong and as for me with a total time of 3:08 I came in 20th out of 26 triathletes in my age group. I guess it's not a good finish time but the experience was really great, the venue was fantastic and the post race brunch was superb. Race happy triathletes... or not!
Email ThisBlogThis!Share to TwitterShare to FacebookShare to Pinterest
Labels: triathlon