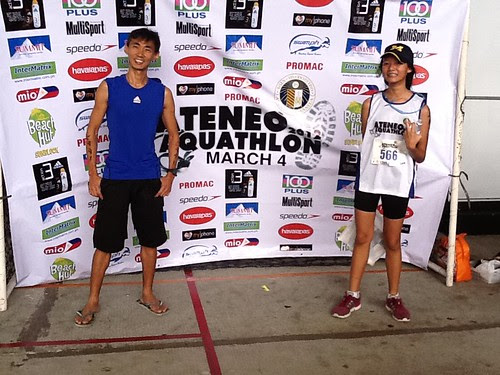 
It was almost a year ago when my daughter first joined an aquathlon event. And here I am following in her footsteps har har! I was a decent swimmer in my elementary days but that was 30 years ago. Right now I'm too lazy to get back into shape but one thing I've learned is that technique or lack thereof never go away easily. As far as running is concerned I started jogging on November, 2011 and although I didn't run far and fast, my 25 minute run plan seemed to work for me. 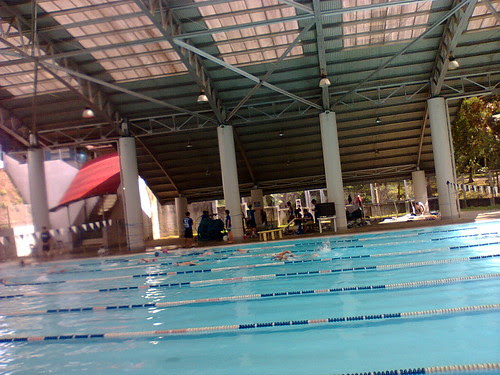 
I signed up for Ateneo Aquathlon to accompany my daughter Camille. The assembly place where we got our race packets and body marking was at the covered courts of Ateneo Loyola Schools right beside the covered swimming pool. Food stands like Yellow Cab Pizza were located at one corner and sponosor's booths lined up along them. The FAST Ateneo Swim Team put a mechanical bull for a rodeo contest at the center of the court, my first time to see one :P. The stage,the computers, and the finish line were also in the covered courts. 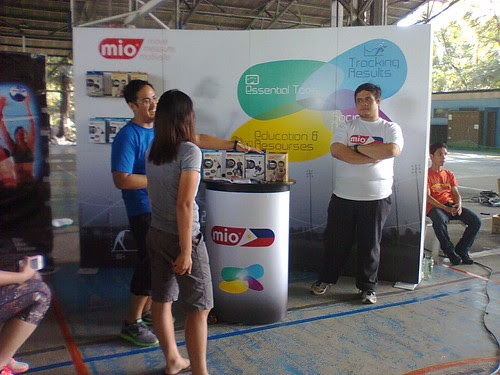 
The race was pegged at 600 meter swim plus 5 kilometer run. A loop in the pool equals 200m so we have to do it three times and the run was an easy 5k course. I was in wave 3 of my age group. The time gap was short and I wasn't prepared when it started, I was still putting my cap and goggles and trying to see if my stopwatch had started. My apologies to the guys on my back for being a human barricade at the start. I overtook a lot of racers from my wave on the first loop and after the third loop I was able to overtake some more from the first wave. It was hard coming from the last wave as I find it quite difficult to pass. Swimming was over in just over 12 minutes and transition took a little bit more than a minute. Oh yes! I was getting better in transition. I was about to take it hard and fast on the run but mr. side stitch prevented me from doing so. I managed to clock a 25 minute 5k for a total of 38 minutes on my first aquathlon, a distant 10th out of 39 athletes. Wow I never thought the word 'athletes' would sound that cool. 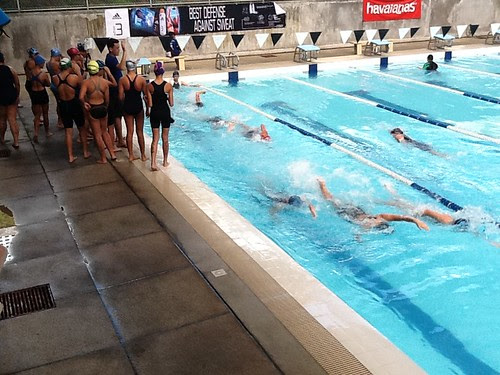 View from the Spectator's Area 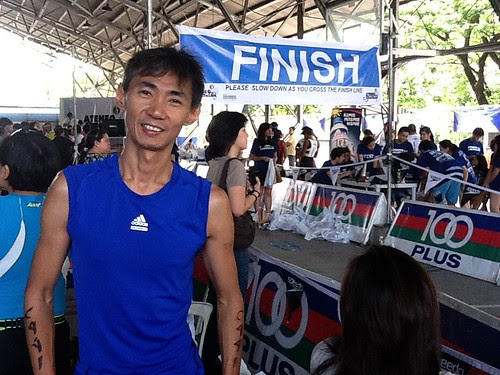 
Then back to the mechanical bull, I couldn't resist the temptation to ride even if my wife and daughter objected to the idea. They were calling for a last contender when I came forward and raised my hand. The time to beat was 1 min. 31 sec., I never came close and worse I got nasty wounds on my left knee from riding too tight to the bull. The amateur organizers were great. At 500 Php entry fee it's just too good to be rare. 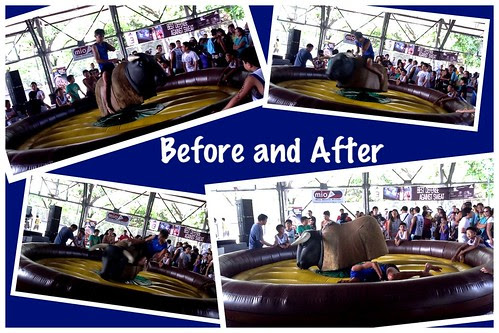